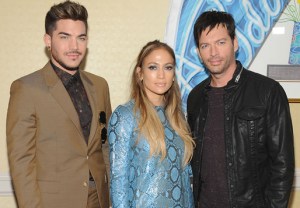 A change (or two) is gonna come when Season 14 of American Idol returns next January — starting with the lineup of judges at the New York City auditions and possibly percolating down to the kind of contestants being sought and the amount of torture they’ll receive from the show’s producers.

Indeed, due to the sudden death of his father-in-law, panelist Keith Urban had to sit out Tuesday and Wednesday’s callbacks at the New York Marriott at the Brooklyn Bridge. But Season 8 runner-up Adam Lambert stepped in alongside Jennifer Lopez and Harry Connick Jr., to hand out Golden Tickets to Hollywood (and the requisite pink slips to folks more suited to their local karaoke bar — or ABC’s Rising Star).

TVLine sought Season 14 intel from J.Lo, Harry and Adam as they reported for duty on Wednesday. Read on for J.Lo’s thoughts on the show’s obsession with her reaction shots during contestant performances, Adam’s advice for potential finalists and Harry’s feelings on the “most unethical thing” he could do on the job. TWISTS AND DOUBT | “I didn’t love it,” said J.Lo, when asked about Season 13 “innovations” — like only letting 20 of the Top 30 vocalists take the stage during the live semifinals, and forcing the Top 5 to vote on the fly whether or not to eliminate the lowest vote-getter — that were deemed cruel by many long-time Idol watchers. The “Rush Week” semifinal twist, Lopez argued, put too much pressure on the contestants too quickly. “I was like, ‘First of all they need extra time on [a smaller] stage before they get to this point!’ Last year, the contestants were thrown into the fire, and I felt like it wasn’t even at Top 12, but maybe three or four weeks after that, before they settled,” she continued. “I want to have the middle rounds, I want them to have their time to adjust to this craziness. It’s like putting the first 10 years of my career in four weeks. I wouldn’t want that.”

THIS IS NOT THE VOICE | “The name of the game is artistry,” said Lambert, when asked if it’s possible in Season 14 for the show to launch another massive pop star. “I know the show kept using that word a couple of seasons ago — although I don’t know if they actually found that many of ’em — but it’s more than just having a nice-sounding voice. It’s about the complete package: It’s the look, it’s the vibe, it’s the personality. Hello, hello, personality!”

Lambert admitted that in today’s pop music scene, “a lot of the magic is created in the studio. The thing that sells stars to a mass audience is, ‘Do you like them or not? Do you wanna be their friend? Do you wanna look at pictures of them all the time? Do they make you laugh, do they provoke you?'” Lambert reasoned. “The standards have changed a little bit, but it’s not up to the show to make that happen, it’s the contestants that’ll make that happen.”

Lopez added that she never worries about finding talent with breakout potential when she shows up for auditions. “It’s funny, I always feel like it’s just a given when it comes to Idol. It’s the one show that’s been able to produce any kind of stars at all — many over the years,” she added, while agreeing with Lambert’s assessment. “Our job is not to pick the winner, our job is to pick a pool of people who we feel could actually have that career. That process is a tough process ’cause we’re looking at the whole package — everything it takes to be a recording star. You think about Phillip Phillips or Scotty [McCreery], and they’re real artists, not just singers. That’s what we’re looking for.”

SEPARATING THE DIAMONDS FROM THE ROUGH | Connick noted the judges are being less forgiving of singers who don’t  appear quite ready for prime time. “We’re not putting people through based on, ‘Maybe in a few weeks they’ll really get into it.’ There’s no time for that. That’s not what this show is,” he said. “But I don’t know if it’s about coming in more polished, as opposed to coming in with a greater wealth of talent. We’ve seen people who are really raw, but you can tell when the bright lights go on them, they’re going to be able to bring it.”

The show’s jazziest judge did concede that Season 13’s finalists may not have shown as much growth because they frequently chose songs that had been in their pre-Idol repertoire and rarely were pushed outside their comfort zones. “I was telling Adam yesterday that the reason I like Hollywood Week so much is that it forces you so far out of your comfort zone, and as you know, being in show business, you’re required to do so many things that feel uncomfortable in so many ways,” Connick said. “It’s not like we’re looking to see how well they sing in Hollywood Week, but how well they deal with being out of their comfort zones. Maybe having a few things be completely out of left field [in Season 14] would be cool.”

WHO WANTS TO BE AN IDOL MENTOR? | With  decidedly dubious Season 13 adviser Randy Jackson not yet confirmed to return, we had to ask Lambert (who helped host a post-Hollywood Week “boot camp” last year) if he’d be interested in the gig. “I don’t know, maybe,” he replied. “I have a lot going on. I’m working on an album. We might go back out on the road with Queen — so, I don’t know yet. There’s a lot happening — time is the issue. But I feel like [mentoring and guest judging] is a way to give back. I know it sounds corny, but I want to help the contestants with the light bulb that could go off.”

Connick, who last season memorably said that if he were a mentor, he’d be with the contestants at their hotel working into the wee hours of the morning, sounded less interested in taking a week or two during Season 14 to work in a mentoring capacity. “I couldn’t mentor them. If I did, it would be kind of a special thing,” Connick said. “Because there’s a huge difference between being a judge and a mentor. As a mentor [in Seasons 9 and 12], I hung with ’em, I befriended ’em, asked ’em about their personal lives, worked with ’em on their music. But as a judge, I never introduced myself to any of them before the contest was over — I don’t fraternize because it’s hard to be impartial when you’ve got a personal thing.”

In fact, added Connick, he wouldn’t even go so far as to vote for a favorite singer from the privacy of his own smartphone. “Oh my God, no. I’m a judge,” he said, shaking his head. “If you would assume I’m voting and being a judge, that’s one of the most unethical things I could do in the competition.”

HONESTY — BUT NOT THE BRUTAL KIND | The always outspoken Lambert laughed that he’s “been known to have opinions” throughout his career, but that while his judging style is decidedly frank, he’s also “sensitive at the same time. It’s hard: They’ve gone through two auditions already before they see us, and most of them have been waiting in a room to see us for hours and hours, and the nerves get crazy. It’s hard to be your best self in that situation,” Lambert noted. “I try to look for who they usually probably are — or who they might be after they get a little more comfortable. I try to get them grounded, breathing and making a good song choice.” IS J.LO READY FOR HER CLOSEUP | J.Lo seemed somewhat surprised when asked how she felt about the show’s producers’  obsessively cutting away to her reaction shots during contestant performances. “Did they?” she asked, laughing. “I think my job is to just be real and be myself. Whatever they decide to cut to, I can’t control that. I can control looking like a fool — and I try not to — but at the end of the day I try to be as honest as I can, and if I feel something I go for it.”

PLEASE DON’T USE THE ‘G’ WORD | Connick flinched a little when faced with the question of whether he’d continue to use geeky-specific musical terms in his critiques (a habit that was frequently/lovingly mocked by his fellow panelists): “You call it geekiness, but that’s like going to the doctor and having him say, ‘You have a problem with your abdomen.’ You’re calling him a geek because he didn’t call it a stomach!” Connick said. “This is the vocabulary we use! We are musicians, we’re supposed to know this. It’s not about me being a geek, it’s about me talking in the vernacular that would ultimately help the contestants the most.”

“I remember people saying to me, ‘You use big words like intonation.’ Intonation, really?” said Connick, smiling but exasperated. “It’s funny: A dancer can go to school and learn terms like tour jete and plié, and that’s OK, but a musician’s not allowed to say enharmonic? It’s just funny. It’s like a junkyard. Have a little respect: You’re a musician, you should learn the language.”

Excited for Season 14 of Idol? Do the judges’ comments have you more or less inclined to tune in? Sound off in the comments with your thoughts!