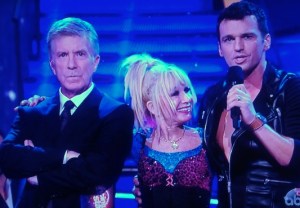 Season 19 of Dancing With the Stars began (somewhat inexplicably) with images of Her Royal Majesty, the Queen of England, a woman who has never thrown her hands in the air (and waved ’em round like she just don’t care).

But that wasn’t the only surprising incident during the two-hour premiere: designer Betsey Johnson dropped an old-fashioned F-bomb (and no, “F” does not stand for “fashion”); the fourth judge nobody asked for, Julianne Hough, openly flirted with at least three male contestants while somehow managing to stay one exhalation away from having her breasts explode out of her deeply unfortunate neckline; and incoming pro Allison Holker (whose specialty isn’t actually in ballroom) stamped herself as Most Likely Post-Season Breakout Star. (Hey, if Derek can get a major arc on Nashville, there’s no reason ABC shouldn’t be looking at So You Think You Can Dance grad Allison for a Fall 2015 pilot, no?)

That said, much of the proceedings were completely predictable: Derek once again scored himself someone young and lithe and able to execute difficult steps, while Tony found himself paired with the septuagenarian. Certain celebs immediately found themselves in the judges’ good graces (Tommy Chong, Tavis Smiley) and scored higher than folks who, by any criteria, had outdanced ’em (Antonio Sabato, Jr. and Johnson, to be specific).

But let’s cut to the chase and give out our own awards for the Season 19 premiere:

DANCE OF THE NIGHT
Alfonso Ribeiro and pro Witney Carson: Yes, childhood Broadway star Alfonso is a ringer, and yes he got the coveted pimp spot, but dude danced his Jive with such effervescent energy and precision, I found myself involuntarily hooting and hollering throughout his routine.

RUNNER-UP FOR DANCE OF THE NIGHT
Janel Parrish and pro Val Chmerkovskiy: The Pretty Little Liars‘ star may have been a little wild with her Jive technique, but there wasn’t a single performer among the season’s 13 celebs who attacked her/his routine with such delicious gusto and wicked abandon. She might be the Season 19 dark horse.

MOST CRIMINALLY UNDERSCORED
Betsey Johnson and pro Tony Dovolani: At 72, Johnson proved limber, enthusiastic and incredibly enjoyable — her only glitch coming in the final seconds thanks to a feather-boa malfunction that wasn’t even her fault. Unlike Michael Waltrip, Sadie Robertson and Tavis Smiley, Johnson’s routine had far more technique and no time-wasting gimmicks that allowed her to sit back and relax early on in the number.

WORST OF THE NIGHT
Lolo Jones blamed an errant cue for messing with her rhythm — and she truly was the night’s biggest disappointment — but she still had more technique and charisma than malfunctioning robots Smiley and Chong.

What did you think of the DWTS Season 19 premiere? Who will go home? Who should go home? And who are your early faves? Sound off in the comments!