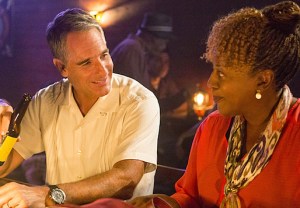 TV’s most watched drama officially made camp in Crescent City this Tuesday night, with the premiere of the spin-off NCIS: New Orleans. Will your DVR continue to say yes to NOLA?

One thing is for certain, coming out of the series opener: If you had a Bingo card listing every New Orleans stereotype/calling card, the pilot checked many of ’em off in short order – including but not limited to:

Starring beloved TV vet Scott Bakula and filmed on location, NCIS: New Orleans picks up not long after the two-part NCIS that served as a planted pilot, with aforementioned “Midwest transplant” Agent Meredith Brody (played by JAG alum Zoe McLellan) still on the hunt for a proper place to live. (Cue Agent Dwayne “King” Pride’s checklist of many a N’Awlins nabe.) The Case of the Week revolved around a Petty Officer whom Pride onetime mentored and now has turned up dead – the only clue to his grisly demise found in a fresh gang tattoo.

That ink paves the way for Lucas Black’s Agent Christopher LaSalle (laid-back, a bit too soft-spoken) to show off some of his connections with local hoodlums (and ability to stare down a threat), while city councilman Steven Weber leans on Pride to sew up the investigation if not also join his Anti-Gang Task Force. But after video-chatting with Dr. “Ducky” Mallard in D.C., M.E. Dr. Loretta Wade (CCH Pounder, doing her best with a supporting role) and forensics whiz Sebastian (Rob Kerkovich, playing the latest member of TV’s Socially Awkward, Overly Chatty Geniuses Club) realize that the vic’s tat had been applied postmortem, meaning it was intended as a misdirect.

By hour’s end, and thanks in part to Brody’s ability to recognize a random shipping code for pineapples (“It’s a NIN!”), it is deduced that the vic had caught onto a drug-smuggling operation, and paid for that discovery with his life. And seeing as precious few people would know to plant the false clue that the kid had re-upped with a gang, Pride finds and warns Councilman Weber: I’m onto you.

What did you think of this first official trip to NCIS: New Orleans? Unique enough to keep around? Or would you rather NCIS: Los Angeles Flavor had stayed in the cushy time slot?