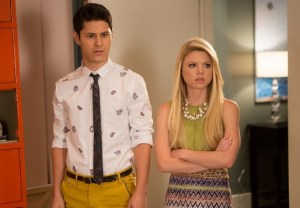 Warning: The following contains spoilers from Tuesday’s premiere of Faking It. If you have yet to watch, head to a different TVLine story. Everyone else, read on…

Someone’s Faking It no more!

On Tuesday’s Season 2 premiere, the reason Lauren has been taking pills was exposed, and it was definitely not a drug addiction. The pint-sized mean girl is actually intersex — hence, the hormone pills — and now all her frenemies know the truth.

THE TRUTH COMES OUT | Covington describes the genesis of Lauren’s storyline thusly: “When Bailey [De Young] signed on to do the show, I promised her, ‘You’re not just going to be the girl who comes in and says bitchy things and leaves.’ I really wanted her character to have a reason to be in our show. It’s all about being — even though it’s called Faking It — your authentic self. So we were trying to think of what would be an interesting backstory that would explain why Lauren is the way she is. Being born intersex came up, and I didn’t know much about it. I was like the characters in the show, and the more research we did, the more we were like, ‘This would explain why she has her walls up. This would explain why she’s hyper feminine. This would explain a lot of the things that we love about Lauren and humanize her without taking away her claws.'”

Her portrayer Bailey De Young, who learned of the twist during the middle of last season, was “really excited” to give a voice to real people who were born intersex. Next up for the actress: the difficult road towards acceptance as Lauren is forced to examine her own feelings about herself. “She has a few moments throughout the season that really challenge what she thinks about it,” De Young says. “She’s grown up told, ‘We don’t talk about that.’ She’s had a few experiences with people who’ve said, ‘You have no reason to be embarrassed.’ So hopefully, it’s going to challenge her perspective of it and help her become more comfortable with herself.” THAT OTHER BIG SECRET | Lauren wasn’t the only one hiding something in the season opener. Liam and Amy will continue to battle over whether or not to keep their unexpected dalliance a secret from Karma, with Liam, in particular, wavering on his stance. “He’s not going to know what to do,” star Rita Volk previews. “A part of him wants to tell the truth and get it off his shoulders. Another part of him knows that he’s going to potentially compromise his relationship with Karma if he does. So that’s going to be his struggle, and Amy’s just going to try to keep his mouth shut however long she can.” But how long can they really keep their hook-up under wraps? “We’re a little more than halfway into filming the season and [Karma] still doesn’t know,” Katie Stevens reveals. Then there’s the matter of the morning after pill box Lauren found in Amy’s trash and what she’ll do with that information. Not to mention, does she know that the other half of the equation was Liam? “Lauren’s smart,” De Young replies. “She knows, and she can do with it what she wants.”

BFFs NO MORE? | Being around Karma, but not in the way that she wants will be “a continuous pain” for Amy, Volk describes. “Amy did this horrible thing and she let [Karma] down. It doesn’t feel good for her. She needs to brush it under the rug and salvage this relationship and get over her feelings. But how do you tell someone to not like someone?” A pretty new gal (played by Matadors‘ Yvette Monreal) might help Amy with that. “She’s trying to figure out, ‘Am I a lesbian? Am I straight? Can I apply these feelings to other girls. Do I like boys?’ She’s questioning that, and that’s OK. So we’ll see what she decides.” Meanwhile, Karma will try to help her BFF along in that journey “because Karma knows if I help you move on, then I can move on,” Stevens says. “But she also wants to be sensitive to that and not push it too far.”

A ROMANCE CUT SHORT | Liam and Karma fans, looks like that couple is hitting pause despite Karma’s declaration of her genuine feelings for the campus stud. For Liam, “there’s hesitation because he knows if he jumps into a relationship with someone he still has a secret [from], it’s not going to work,” Gregg Sulkin explains. “So he needs to figure himself out first and that secret and how he’s going to deal with it before he jumps back into anything.” The situation is equally complicated for Karma, who is focused on rebuilding her friendship with Amy and “knows that in order to do that, she needs to put her feelings for Liam on the back burner,” Stevens adds.

THE MIDDLE MAN | As Amy’s lesbian sherpa and Liam’s best friend, Shane is, once again, caught in the middle with the latest secret. “It puts a lot of tension between Shane and Liam because there’s a been a lot of mistrust and secrets and lies,” Michael J. Willet previews. “Shane ends up confronting Karma about all of the chaos that she’s created. It’s a very interesting scene where he tries to see what everyone loves about her. I think on some level he ends up liking her, too.” As for Shane’s own love life, well, don’t get too attached to his current beau. “Pablo is celibate and Shane has been forced to be, so we’ll see how long that lasts.”

Faking It fans, what did you think of the season premiere? Grade it via the poll below, then hit the comments to back up your pick.