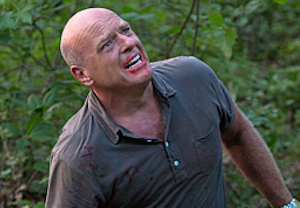 The following recap, by the very definition of the word “recap,” contains spoilers from Under the Dome‘s Season 2 finale.

CBS’ Under the Dome, as Season 2 drew to a close, kinda sorta evoked Stephen King’s The Shining — and in doing so, the summertime drama took its first major step into channeling some of Mr. King’s horror themes.

The finale also teased (barely) what any possible third season would look like.

Having been left with the crater into which Melanie got sucked, the gang’s consensus is to explore the hole, with the hope that it leads out of the Dome. Meanwhile, Big Jim rushes stabbed Pauline to the hospital, but without an MRI, Sam’s hands are tied as to what all he can do. Big Jim cries foul, yet feels confident that the Dome would never let Paulina die, that this is just another “test” for his “chosen” family. But while Jim’s away rummaging for saline, Pauline sees the writing on the wall and implores Becky to “please be kind” and end her suffering.

After some debate, Becky does just that, with a morphine overdose — and then she clumsily allows Big Jim to see that she euthanized his recently returned wife. This truth makes Big Jim snap!, once and for all, first taking a hammer to poor Becky (“No one’s gonna miss you!“), and then putting a bullet into kindly Andrea’s noggin (while all Julia can do is watch). Big Jim then makes run at the redhead herself — his idea of “ruining the Dome’s plans” after it declined to resurrect his Mrs. — but Julia escapes to the woods, where everyone in town is descending into the crater.

Junior opts to handle the Big Jim situation himself, finds his dad in the woods and shoots him. In the shoulder. And then stops shooting at his murderous, insane father. Allowing Jim to (slowly) chase his son through the woods.

Meanwhile inside the crater’s passage, Barbie and Julia and among the last to traverse a crack in the pathway. But after Barbie makes the (tiny) leap, the chasm widens, proving too great a distance for hobbled Julia to jump. She says the Dome will protect her, as long as Barbie — whom Pauline “saw” leading the town to safety — fulfills his duty, so he agrees to come back for her (and, ultimately, Junior).

As the season comes to a close, Barbie, Joe, Norrie at al arrive at a wall of butterflies, which promptly clear way to reveal… a wall of stone. Norrie — who was full of all sorts of emotions this episode, tracing back to the time she punched a girl for mocking her hairdo, apparently — flips out and yells at the wall of stone, to little effect. But then a lone monarch shows Barbie where to lay his hand, and as he does so, the wall begins crumbling, fractured by beams of semi-pricey special effects. And once a doorway is created, we see that just beyond it is… Melanie, looking quite ethereal and otherworldly.

“Follow me…,” she creepily invites. “We’re going home.” And now I have the Resurrection promo song stuck in my head.

What do you think “home” is? And is Big Jim brutally killing poor, stranded Julia and Junior as we speak? Share your thoughts on the Season 2 finale — and whether there should be a Season 3 — in the Comments.