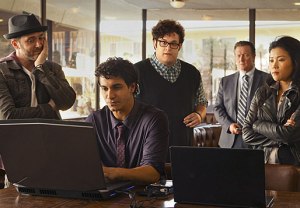 There isn’t a single problem that Scorpion‘s Walter O’Brien can’t solve. Well, if you don’t count the whole “unable to process emotions” thing.

On the CBS procedural, which debuted Monday, Walter (Body of Proof’s Elyes Gabel) is one of the five smartest people in the world, and he’s surrounded himself with other highly intelligent outcasts who are just scraping by in the real world: Sylvester Dodd, a mind-bogglingly fast mathematician; Toby Curtis, a Harvard-trained behaviorist; and Happy Quinn, an engineering whiz (who also has an affinity for punching people in the mouth).

Together, the team has a combined IQ of more than 700, but coping with emotions and connecting with other humans aren’t among their strengths. (Case in point: When Walter breaks it off with his girlfriend of three months at the start of the episode, his parting gift to her is a list of emotions she’ll likely experience during the course of their split. Complete with a decision tree! How… thoughtful? I think?)

But after months of barely making their rent and relying on odd jobs around California, the team is called upon by Homeland Security Agent Cabe Gallo (The Unit’s Robert Patrick), who needs the geniuses to get LAX airport’s communications system up and running again, after a corrupt software upgrade has taken down the entire network. Their mission, should they choose to accept it, is to prevent 56 planes from falling out of the sky in the next two hours. No biggie.

Walter is reluctant to help Gallo, and remains that way for most of the hour. See, after Walter first appeared on the government’s radar as a child (for hacking into NASA in search of space shuttle blueprints, as kids do), Gallo recruited a teenage Walter to develop tracking software that would assist in dropping military aid packages. Instead, Gallo and his team used Walter’s system to drop bombs, killing 2,000 civilians and breaking Walter’s trust in Gallo indefinitely. That chill you feel in the air? It’s the icy, icy shoulder Walter’s giving his former boss.

The team carries out their mission at a local diner, where they encounter waitress Paige (Smash’s Katharine McPhee) and her quiet son Ralph, whose genius capabilities Paige has been mistaking for an intellectual disability. And although she’s not quite as gifted as the rest of the Scorpion team, Paige plays an integral part in getting the LAX communications up and running again — so much so, that when Walter and his associates are permanently brought on as part of Gallo’s new strategic response team, Paige is offered a job on the squad, as well. Even more enticing than the job prospect? Paige’s renewed sense of hope for her son, who finds he has an ally in Walter.

It’s hard to see just how well Paige’s subplot will fit into the overall narrative, as she attempts to translate the “normal” world for a group of emotionally stunted misfits. But Scorpion’s first hour is nothing if not action-packed — and if you felt a little tug on your heartstrings in the last five minutes, you certainly weren’t the only one.

OK, your turn. What did you think of the Scorpion premiere? Grade the episode via our poll below, then hit the comments to back up your choice!