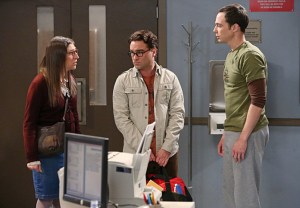 The Big Bang Theory kicked off its eighth season with two back-to-back episodes, the first of which answered the burning question, “Where the heck did Sheldon go?!”

The action picks up 45 days into Sheldon’s “railroad journey of healing,” and all is not well. Robbed of all his personal belongings and dignity, a panicked, unhinged, tighty-whitied Sheldon is seen begging strangers at an Arizona train depot for help. He seeks refuge at a nearby police precinct, where he phones Leonard and asks for a lift home. Leonard reluctantly does the right thing and invites Amy — who’s understandably pissed that Sheldon called Leonard and not her — to accompany him on the six-hour ride. Adding insult to injury, when they arrive at the precinct, Sheldon races to embrace Leonard as a humiliated Amy looks on. His first words to his girlfriend? “Why did you come?”

RELATED Big Bang Wedding Scoop: Find Out Why Penny and Leonard Won’t Be Getting Married This Season

The tension mounts on the ride home, with Amy serving as a mere extra in Sheldon and Leonard’s buddy comedy. She eventually explodes. “I’m mad at you,” she cries out. “How could you just go away like that without even saying goodbye, and then call Leonard for help instead of me?!” And just as Sheldon is on the verge of scaling new heights of insensitivity — he suggests Amy stick her head out the window like a dog so he can have a private chat with Leonard — he confesses, “The reason I called you is because I didn’t want Amy to know I couldn’t make it on my own.”

Leonard implores him to share this vital piece of information with, you know, Amy, and he wisely takes his advice. She, naturally, is elated. “You were worried about that?” she marvels. “Sheldon, it’s OK with me that you’re not perfect.”

In the end, Amy convinces Sheldon that, in spite of the abrupt end to his journey, the trip changed him for the better. He concurs. “I’m a lot like Gandalf the Grey,” he reasons. “He fought the Balrog and emerged stronger than ever as Gandalf the White. I was robbed of my phone and pants, and I too came back stronger. And whiter too because I wasn’t in direct sunlight for six weeks.”

CAREER GIRL | Elsewhere, Bernadette recommends Penny — rocking the same shorter ‘do as her portrayer Kaley Cuoco (go figure!) — for a sales job at her pharmaceutical company, but the struggling actress-waitress comes down with a serious case of cold feet on the eve of her big interview. She eventually overcomes her nerves, shows up for the meeting with B’s boss (played by Stephen Root!) and blows it. Big-time. But when the topic turns to their mutual fear of Bernadette (LOL!), the tide turns and she gets the gig.

MOMMY’S DEAREST | Stuart and Mrs. Wolowitz’ caretaker-caretakee relationship has deepened (creepily so) during the time jump, much to Howard’s horror. Turns out the only thing Stuart despises more than the sight of his mother is the sight of his mother bonding with Stuart. In the episode’s funniest scene, the whole kerfuffle comes to a head when Stuart shows up at Howard and Bernadette’s apartment to clear the air and ends up illuminating all of Howard’s considerable mommy issues.

STANDOUT QUOTE | To ensure that Amy isn’t eavesdropping on his sensitive convo with Leonard, Sheldon declares, “Leonard, as soon as we get home, I want to have coitus with Amy.”

STANDOUT QUOTE (HONORABLE MENTION) | Sheldon presses the officer assigned to his burglary case for an update on the investigation: “Sherlock Holmes always says, ‘When you eliminate the impossible, whatever remains — how ever improbable — must be the truth.’ Now… have you tried doing that?”

What did you think of Big Bang‘s Season 8 opener? Grade the first episode below, and then elaborate in the comments. And while you’re at it, feel free to weigh in on the second episode as well.