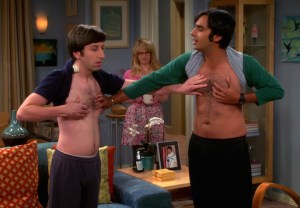 The Big salary standoff of 2014 has been resolved.

Helberg and Nayyar had been making $125 and $75K, respectively. There’s no word yet on what their new salaries are, but it’s safe to say they will pale in comparison to the $1 million-an-episode Parsons, Galecki and Cuoco will be pulling in. (Deadline’s Nellie Andreeva has some juicy intel on the protracted and tense talks.)

The news ensures that the cast will be present and accounted for at Wednesday’s delayed table read. (Later-season additions Melissa Rauch and Mayim Bialik are on different contract cycles, and thus already have deals for the coming season.)

A Warner Bros. rep said in a statement, “Production on Season 8 of The Big Bang Theory will begin Wednesday, August 6, with contract negotiations now having been concluded.”