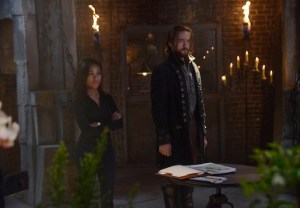 Where the devil is Yolanda when you need her?

That’s one of the questions likely swirling in Ichabod Crane’s head during Sleepy Hollow‘s Season 2 premiere, which has its way with us for a while before finally coughing up the sweet, sweet resolution we’ve been longing for since January.

We’ve got a lot of ground to cover, so saddle up your red-eyed steed and prepare to review “This Is War.”

RELATED Fall TV Spectacular: Exclusive Scoop and Photos on 42 of Your Returning Favorites, Including Sleepy Hollow

HOW OLD ARE YOU NOW? | The action begins with a horizontal shot of Ichabod, in the dark, forlornly calling out for his leftenant. We’re led to believe he’s still in the coffin, but as the camera changes to a vertical shot and the lights come on, we realize he’s in the cabin… and it’s his birthday… and it’s a year later?!

Ichabod makes a face as Abbie brandishes a cupcake and congratulates him on turning 251. “I shall consider myself punk’d,” he says, so proud of himself I’m not even going to make fun of the fact that his pop-culture reference is basically old enough to attend a middle-school dance.

The talk soon turns to the losses they’ve sustained in the past year — or, it would if Ichabod didn’t shut the conversation down like a clam shack at the end of the summer. ” We both lost someone we loved. Let us leave it at that,” he says quietly, to which she replies that she wouldn’t have made it through the prior 12 months without him. “Nor I you, Leftenant,” he says. (Side note: We’re not even five minutes in, and I am wrecked, guys. I’ve missed these two!)

KEY INFORMATION | The mutual Witness admiration is interrupted when Abbie gets a call: a local Benjamin Franklin scholar has asked for their assistance, something Ichabod notes is generally not a good omen. He’s right; when they arrive, Headless has been there, killed the prof and a cop, and rooted around in the historian’s papers.

Ichabod wants to follow The Torso Formerly Known as Abraham into the night – “He killed my wife!” he cries – but Abbie reminds him that she also lost Jenny to the fiend and that they’ve got to stay on mission if they want to win the war on evil.

The pair finally find what Headless wanted: information about a key that can unlock Purgatory, circumventing the whole soul-for-a-soul rule that kept Abbie there when Ichabod freed Katrina. We also learn that Franklin was Ichabod’s mentor in the Revolutionary War Against Evil, that Franklin (Timothy Busfield, looking like he’s having a great time) liked to take “airbaths” in the buff, and that Crane thought Franklin a corpulent boor who considered himself smarter than everyone else. “I could see how that would be hard for you,” Abbie says, politely choosing not to give an epic eyeroll (but you know she wants to).

REVELATIONS | Even before the pair talk to an imprisoned Henry — or “the frickin’ Horseman of War,” as Abbie calls him — about where the key might be, you just know something hinky is going on. There have been clues throughout (Ichabod’s weird breathlessness, that strange plant growing on the prof’s desk), but by the time that Henry makes mention of being “tricked into believing a lie,” it’s pretty clear: Everything we’ve been watching so far has been an illusion.

Abbie and Ichabod come to the same conclusion. Unfortunately, it’s moments after they’ve helped Henry realize that Jenny knows how to find the artifact in question. As the Witness are ripped away from each other – Ichabod thrown back into his coffin, Abbie back to the gray wasteland that is Purgatory – she shouts, “Find Jenny and find the key!” and he vows, “I will return for you!” Nice fakeout, Sleepy Hollow!

JENNY LIVES! | The good news: Jenny survived the car crash. The bad news: Hessians drag her to an empty warehouse, where Henry reads her sins and sees a sketchbook with a drawing of the key, surrounded by a coded message.

At the same time, Ichabox tries to record a farewell missive on Abbie’s phone – which, as many of you called, is still in his pocket but has no service – but is thwarted by the device’s lack of memory. (Tom Mison’s line reading when the message doesn’t record is excellent.) But he soon realizes that the soil surrounding him is highly sulfurous, and before you know it, he’s devised a rudimentary bomb that blows him to freedom.

RELATED  Get TVLine’s First Impression of Jane the Virgin, The Flash, How to Get Away With Murder and Other New Fall Shows

MIRROR, MIRROR | Ichabod texts, then rescues, Miss Jenny while she’s in a shootout with some Hessians. (It’s more complicated than that, but we’ve got a lot more to cover A swing by the archives then locates the sketchbook Henry saw in Jenny’s head, and Ichabod is pleased to be able to recognize and decipher Franklin’s code: The actual key is hidden in Sleepy Hollow.

Over in Purgatory, Abbie runs into Andy (hi, John Cho!), who leads her to Moloch’s mirror — the same one through which Katrina used to communicate with Ichabod. So Abs steps up to the glass and does her best Miss Molly impression as she recites an incantation and Ichabod’s name… then he appears in the chamber with her! They leap into each other’s arms, and it is everything I hoped their reunion would be. She warns him that the key may be another trap, and Ichabod owns me forever as he says, “The only risk, Leftenant, is in leaving you behind… Hold fast, Abigail Mills. I’m on my way!”

DOUBLE THE PLEASURE | With the key in hand, Ichabod opens Purgatory with the spell Henry taught him… and finds Abbie floundering about in the great, wide open. “I’m here, just as I promised!” he cries, breaking away from their hug to offer her a sip from his flask. Just as it seems like Mills is going to allow Ichabod to slake her thirst (and yes, I intentionally made that sound dirtier than it really is), another Ichabod appears and begs her not to drink. It soon becomes clear that the first Ichabod who approached her is not the real deal, though after Abbie is knocked on the head while fighting him, she has a hard time telling her true pal from the Trickabod.

Thank goodness, then, that she’s listening as the Ichabod with the key tells her to run so they can escape. Seemingly without reason, Abbie grabs a sword out of the ground and beheads the Crane that’s within arm’s reach… just as the real Ichabod appears, wondering how she knew it wasn’t him. Simple: The faker said “lieutenant” instead of “leftenant” – and the pair fist bump to celebrate.

With Moloch in hot pursuit, the Witnesses hightail it out of Purgatory and use the key to get past the whole one-in-one-out thing. The Mills sisters reunite (I love them, too!) and Ichabod notes that “the war has begun in earnest” – though he doesn’t know the half of it. Somewhere else in town, Moloch appears to Henry and shows him the Horseman of War’s armor… which Henry will control via his soul, like an RC car from hell. As War’s fiery sword reflects off the old man’s glasses, Henry is transfixed, uttering, “Magnificent.”

HOW’S THE MISSUS? | Where’s Mrs. Crane through all of this, you wonder? She’s been secreted away in what looks like an old house by Headless, whom she sees as a whole man once he fastens the emerald pendant around her neck. Questions to ponder while we wait for next week’s episode: Headless has loungewear? And is it just me, or has he been working out?

Now it’s your turn. Grade the premiere via the poll below, then hit the comments to back up your choice!