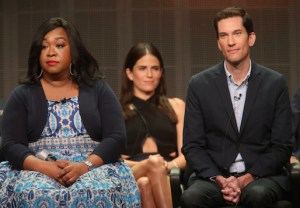 You may have recently heard: How to Get Away With Murder – the third prong in ABC’s new “#TGIT” triple play from the Shondaland production house — was not created by Shonda Rhimes.

Rather, Murder is the brainchild of Shondaland vet Pete Nowalk, a non-angry white man who has penned scripts and produced for both Grey’s Anatomy and Scandal. As such, the freshman drama — premiering Thursday at 10/9c, after the Grey’s Anatomy and Scandal season openers — marks the shingle’s first non-Shonda creation to score a time slot since Jenna Bans’ Off the Map.

“I’ve worked for them forever,” the 36-year-old Nowalk tells TVLine. “[Shondaland EP] Betsy [Beers] read my first pilot, back when I wasn’t working anywhere. This was way back, when you just sit at home at age 25 and write your pilot. But Betsy was nice enough to meet with me and say, ‘You’re good at this.'” A short while thereafter, Nowalk landed an entry-level job on Private Practice.

Reflecting on that prescient recruitment of Nowalk, Beers says, “Pete’s got an amazing brain — he’s an incredibly intelligent, fiercely creative writer. He has always had a unique and very creative viewpoint on life.”

Although that first pilot from Nowalk was shopped to NBC but ultimately stalled, “We got to know him” through the experience, Beers shares. And as it would turn out, his second time at the plate was a home run, landing a plum spot on ABC’s 2014-15 schedule.

CLASS IS IN SESSION
How to Get Away With Murder stars two-time Academy Award nominee Viola Davis as Annalise Keating, a criminal law professor who cherry-picks a handful of elite students to vie for a gig at her tony law firm. But as with many a Shondaland ride, there’s an E-ticket twist: Keating’s charges unexpectedly find themselves embroiled in a murder mystery of their own making.

Reflecting on his first stab at Murder, with began in summer of 2013, Nowalk says, “The idea was a little different –– I didn’t have the school aspect. Annalise was just a criminal defense attorney, and one of her first-year associates murdered someone.” Upon later revisiting the concept, “I was like, ‘What happens if I set it in a school?,’ and that’s when it clicked for me. It made it feel more fresh and fun to me, plus you had this creepy university atmosphere.” A fluid timeline and illuminating (or sometimes confounding) flashbacks add additional wrinkles.

Versus Scandal, which shortly into its run ignited a firestorm of pop culture buzz, Murder “is going to be twisty and turny in its own way,” Beers avows, “because it’s going to be Pete’s way. He’s really interested in playing with time, and he has a really, really, really good brain for the procedural.” And in a supporting cast that includes Billy Brown (Sons of Anarchy), Liza Weil (Scandal) and a study room full of fresh faces, “He’s created this incredible group of characters who become intertwined both in plot and emotionally, and that certainly fits in with the rest of our shows.”

THE SEARCH FOR ‘A PHENOMENAL, CHARISMATIC STAR’
Putting the fear of everything into the students and standing at the forefront of Murder, of course, is Viola Davis’ Annalise Keating, whom Nowalk says has “a really different world view” than, say, Scandal‘s Olivia Pope. “As intimidating as Olivia is, she’s not manipulative,” he observes, while Annalise certainly is.

To realize the potential of the character, “We needed a big, phenomenal, charismatic personality who was just an incredible actress,” Beers says. “You had to know that she could command a room and you believed her as a law professor and you believed her making a final argument in front of a jury. But at the same time, you also believe that she was in romantic relationships with these guys” – husband Sam (American Dreams‘ Tom Verica) and something-on-the-side Nate (Brown) – “and that she had a vulnerability. And you had to feel there were things about her that would be mysterious and that would be portrayed intensely.”

In early discussions about casting, Nowalk suggested Davis – a bit of dream casting Rhimes at the time acknowledged as “cute.” As Beers recalls, “We understood that [Davis] wasn’t necessarily looking [for TV work], so we sent it to her. Linda Lowy, our phenomenal casting director, was like, ‘Let’s just try.’ So when we got that phone call, that she had read it and was interested… I can’t even tell you!”

As if anyone needed further validation, the table read for the series pilot near-immediately detoured into a celebration of its frontwoman. “When Viola did that initial ‘I am Annalise Keating…’ [classroom] speech, everyone in the room looked at each other and we all broke out in spontaneous applause, because it was so exciting to hear her,” says Beers. “She immediately inhabited the character.”

And what a character she will prove to be. As Annalise’s sire, Pete Nowalk forewarns: “She has been through some s–t, and we’ll find out what that s–t is. But rest assured, it is dark — and hopefully it’s interesting to people.”