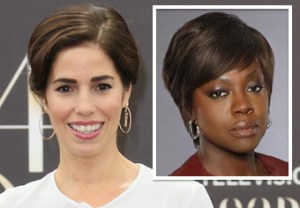 After solving a murder on Devious Maids, will Ana Ortiz soon find herself committing one?

Ortiz will guest-star on ABC’s upcoming drama How to Get Away With Murder, premiering Thursday, Sept. 25, at 10/9c, TVLine has confirmed.

No details about Ortiz’s character are available, but the actress’ #Willigetawaywithit hashtag suggests she may be one of lawyer Annalise Keating’s (played by Viola Davis) clients.

So excited to be working on this show!!! #HTGAWM #ViolaDavis #ShondaRhimes #Willigetawaywithit http://t.co/EQWDwJhORJ

* NFL vet Tony Gonzalez will guest-star in a fall episode of NCIS, playing a special agent (as the former pro revealed on Instagram).

* Lolita Davidovich (The L Word) will appear on Fox’s midseason drama Backstrom as the mother of Thomas Dekker’s character, per The Hollywood Reporter. Her character is described as former hooker who decided to become a dental hygienist after finding God.

* The CW will air the one-hour special The IHeartRadio Album Release Party With Maroon 5 on Tuesday, Aug. 26, at 8 pm.

* Starz will debut the limited series The Missing, starring James Nesbitt (The Hobbit films) and Frances O’Connor (Mr. Selfridge), on Saturday, Nov. 15, at 9 pm. The eight-episode thriller centers around the psychological fallout and ensuing manhunt resulting from the disappearance of five-year-old Oliver Hughes while on holiday with his parents (Nesbitt and O’Connor) in France in 2006.

* Netflix will stream the BBC drama Happy Valley in the US and Canada, beginning Wednesday, Aug. 20. The six-part drama revolves around the personal and professional life of a hard-working, dedicated police woman in a small town where drunkards, drug addicts and teenage pregnancies are a way of life. Her world is turned upside down when the man she thinks is responsible for her daughter’s death is released from prison.

* CBS has given a pilot order to Austen’s Razor, a drama about a brilliant bioethicist who is called in at crisis moments to solve the most complicated, dynamic and confounding medical issues imaginable.