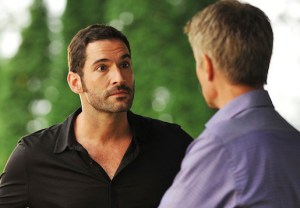 USA Network’s Rush wrapped its freshman run on Thursday night by dealing blow after blow (as well as some actual blow) to its titular doc, to the point that he was prompted to make a difficult call about his brighter-looking future.

Mind you, Rush went into this hour relatively on top of the world. After patching up Eve’s insidious ex J.P., the fellas agreed to give one another a verrrrry wide berth, lest anyone tattle to the cops about the assault/shooting. Rush was also on track to not just take the trip with Sarah, but also pop the question, thanks to a real sparkler supplied by actor pal Max’s “guy.” And to top it all off, the wannabe-good doctor threw his stethoscope into the ring, to take that proper job at the hospital.

And then everything and anything went terribly wrong.

The job? Torpedoed by his own father, the lone dissenter on the board. Oh, and dad’s trophy wife Corinne is pregnant — with Will’s baby. (If you didn’t see that one coming, turn in your Sony flatscreen now.)

J.P.? Yeah, he’s not keen at all about steering clear of Eve. So he baits Rush into “paying a visit,” by deluging Eve with texts. Upon arriving at his frenemy’s doorstep, Rush is shot by J.P. (in the shoulder), as the start of a frame job. But Rush lunges at the cretin, slamming him down onto a glass coffee table. J.P. is cut badly and begins to bleed out, crying for Rush’s help. Rush though is not only content to leave him be, he’s on the verge of turning the gun on him, when Manny happens by and stops Rush from making a big mistake. Manny takes the gun, but later manages to get pulled over by the cops, the recently discharged weapon found on his person. Manny starts off keeping mum, but….

And then there’s Sarah, waiting for Rush at the “Million Air” departure gate — and looking good. She’s happy to see that Will showed, but he’s got something to say first (as his wound bleeds through his suit coat): He not only can’t go on the trip, he can’t be with her anymore — because he feels destined to never have the perfect life, as this very bad day has shown him. Sarah, rightfully, is devastated and walks away, declaring him plum out of second chances.

But wait, there’s more. Before getting on the plane by himself, Rush ducks into the airport loo to load up on the coke he nobly took away from Max. And the last fleck of the white stuff has barely flown up his nose when he steps back out toward the plane, only to be met by several police cars, cherry lights a-blazing.

(And for what it’s worth, Alex’s day didn’t go much better, seeing as his wife Laurel had gotten wind of his sexual indiscretion — payoff included! — and told him to get the hell out.)

What did you think of Rush‘s Season 1 journey? Is this a story you’d care to see continue into a Season 2? If so, with any changes?