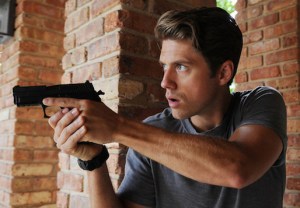 The following recap, by the very definition of the word “recap,” contains spoilers from Graceland‘s season finale.

Just as Graceland‘s Season 1 finale left FBI superstar Mike Warren’s future with the titular house in question, the sophomore closer put his life on the line — perhaps even a flat line.

Given how last week left off, the hour opened with most everyone in quite a pickle. Pregnant Charlie, who had been hunting down Amber, was grabbed. Johnny had discovered that the marked bills he labored to land in Sid’s hands instead wound up in his own. Briggs was rolling with Sid, aiming to take down the dirty cop and Solano, unaware that his cover was blown. And Paige was as close as ever to deducing that Mike not only didn’t rescue Lina, but burned her himself.

Taking the roommates one by one…

JOHNNY ‘fessed up to Lucia that he was a Fed out to arrest her father and brother. Lucia was reasonably “OK” with it all, but soon afterwards, Carlos lured Johnny away and held him at gunpoint (having spied Jake swapping the bills the night before, effectively blowing their cover). Later holding both Johnny and Lucia at gunpoint, Carlos forced the Fed to keep his U.S. government-operated drug planes running — or Lucia dies.

PAIGE brought the letter “Lina” had sent home from “Scotsdale” to Jakes, perhaps realizing he didn’t have any sort of season-ending storyline but also needing ICE’s help in seeing if the note was legit. After ICE found Lina’s prints on the stamp, Jake told super-skeptical Paige that there is a version of this story where she’s, you know, happy for her friend. Paige starts to believe that — but more on Lina later.

CHARLIE got roughed up by Amber’s money launderer, some British guy named Germaine who was determined to make her admit to being a cop. Charlie put up a good front (even I started doubting she was the law!), and Amber did her best to have Germaine dial it down a notch. Meanwhile, when BRIGGS checked in with Mike just before entering Solano’s compound with Sid (where he surely would have met his maker), Mike (…the dope) let slip that Charlie had gone missing. Briggs thus hastily aborted the op and drove back (three hours), arriving at the warehouse just in time to save Charlie, and their baby. Germaine is in the wind, however.

And then there’s MIKE. Just as the tac team is about to monitor Briggs’ infiltration of Solano’s, Sid had a bomb scare called into the FBI office, forcing them to cut bait. And since Mike had just sent Briggs racing to find Charlie, he took it upon himself, sans any sort of backup/sanctioning, to close the deal at the compound. But what the cowboy finds there is most everyone — cartel thugs, Solano Sr. himself and Sid’s team — dead. Sid himself, wounded by his own hand, gloats to Mike about the frame job he has pulled off, killing his guys with the gun he pinched from Graceland.

Mike goes into hiding, but since he got shot at the compound and needs medical attention, he phones Briggs for a fake ID. It’s Paige who brings it, though — and she also delivers a mea culpa, about how she came to see evil in the faces of good men like Mike. So, Mike’s in the clear for Lina’s death… until his groggy self mumbles to Paige that it was “better” for Lina’s family to “believe” she lived. Oy!

Steaming mad, Paige takes off, into the rainstorm, ultimately winding up at Sid’s office. There, she informs him that Mike has been hospitalized under a dummy name, and nudges him to “finish” the job.  Sid indeed later shows up at Mike’s bedside, where he swaps the heart rate monitor onto his own finger while he crushes Mike’s breathing tube. Sid vows to go after every burned Graceland Fed, as Mike gasps for air. Briggs, having learned from Paige what she did, arrives right after Sid has left, and just as Mike flatlines….

So, not only is Season 3 up in the air, but so (ostensibly) is Mike’s life. Does he have one last gasp in him? Or, does anyone think that Paige blabbing to Sid was part of a ruse? After all, he did sing like a bird in the hospital; maybe it was all caught on camera? (Unlike his invasion of Graceland, a video which would have easily exonerated Mike of the massacre.)