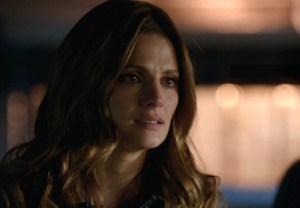 To help tide the rest of you over (and more importantly, add fuel to all those theory-building fires), I jotted down a few non-spoilery thoughts about the intense, even twistier-than-expected episode, which was penned by new showrunner David Amann. Take a look:

* The cold open, which picks up immediately where the finale left off, is gorgeously directed by Rob Bowman, as Kate processes the ghastly scene before her, fights tooth and nail to get a closer look and, at first, can only believe the very worst. Watch it below:

* All told, the first seven minutes (leading up to the first commercial break) are quite frenetic. Real edge-of-your-seat, no-coming-up-for-air stuff.

* Bracken, 3XK and a third blast from the past all get name-checked as Kate takes stock of her and Rick’s assorted enemies.

* Rick is first seen about one-third of the way into the episode — and in a most unexpected context.

* Someone at one point is made to wonder about the missing groom, “Maybe there’s a secret side to the man nobody knows?”

* Someone at one point is made to wonder if Rick perhaps had last-minute “misgivings” about marrying Kate.

* Among the guest stars, Jon Lindstrom (General Hospital) plays an FBI agent who makes Kate at least consider a harsh reality, while Matt Letscher (Scandal) plays someone with information that throws the investigation into a peculiar new direction. (And before everyone asks, yes, Tory is in the episode.)

* Make no mistake, the best-selling novelist’s vanishing does make headlines. Lots of ’em.

* As first reported by TVLine, there is a decent-sized time jump about midway through the premiere.

* Dueling theories about what transpired (and who may have had a hand in it) will put Esposito and Ryan at odds.

* Whomever is behind this mystery is deduced to have “unlimited resources” at his or her disposal.