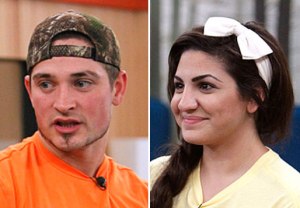 In the world of professional basketball, there are few milestones more exciting and nerve-wracking than the Final Four.

In the world of Big Brother, the Final Four is just as pivotal.

If it’s not enticing enough that this week’s Head of Household is eligible to play for the crown again next week, what makes the Final Four unique is the sole eviction vote (usually cast by the Power of Veto winner). Aside from the finale, this week in the BB house boasts the highest stakes of the summer.

How did those pivotal moments shake out? Let’s recap:

THE WEEK SO FAR | Although this summer’s Rewind twist threatened to have all of us at home experiencing deja vu, the post-button-push events found Caleb winning Head of Household instead of Frankie, while Cody absolutely crushed his competition in the Power of Veto challenge. And even though everyone who has sat next to Victoria on the past few eviction nights has gone to the jury house instead of her, Frankie still clung to hope that his fellow alliance members would spare him this week. (Which they didn’t. On Tuesday, Derrick and Cody both voted to oust the less-famous Grande sibling, and Frankie left the BB house in a flurry of pink hair and glitter.)

And that brings us to Thursday’s live broadcast, featuring the second eviction of the week. Newly minted Head of Household Derrick makes the obvious choice to nominate Victoria (who’s still pretending to hate him), and in true puppet master fashion, slyly convinces Caleb to volunteer as tribute for the chopping block.

But it’s hardly the nomination ceremony that matters this week; all the power really lies with the Power of Veto competition, which this week allows CBS yet another opportunity to plug its fall line-up. (Tonight’s promoted show: Stalker, which is incredibly fitting for Caleb and maybe a little too spot-on for real-life cop Derrick). Contestants must use photos of evicted houseguests to connect certain events that happened throughout the summer. Derrick deliberately takes his time, not wanting the responsibility that comes with this week’s POV win; Victoria feels fairly confident, only to have about half of her answers wrong when she first locks them in; and Caleb’s feelings on the competition can be summed up by this Diary Room confession: “I’ve never been good at webs.”

I don’t know what that means, but it makes me incredibly intrigued by Caleb’s past.

It’s not all that surprising when Cody walks away with the Veto win, making him the only vote to send either Caleb or Victoria home. (This TVLine writer has never been a huge Caleb fan, but I have to admit it’s a little sad to see him prematurely celebrating his Final Three status, when Cody has no intention of keeping him around.) And, as planned, Cody does oust Beast Mode Cowboy, after giving a surprisingly honest speech about the Final Two pact he’s had with Derrick since the second day of the summer. (Derrick seems totally cool with Cody’s confession, and I can’t imagine the two of them didn’t discuss it beforehand, but I also wonder if Derrick was just accidentally outed as someone who’s playing both of his Final Three companions.) Still, Caleb takes the eviction like a man, and spends his last few on-camera moments flexing his muscles and blocking Julie Chen’s line of vision. Should we have expected anything less?

* In a series of flashbacks that take place before Frankie was booted, Frankie goes to Derrick in search of the truth: Is he getting evicted? Or is he safe? Derrick confesses that Frankie will be getting ousted, prompting the pink-haired competitor to take to the HOH bedroom and tell his former allies that he will single-handedly decide who wins this season of Big Brother. Cody tells Frankie he’s “not f—king Jesus” (amen!), while Caleb gets personal and says he would destroy Frankie in the Final Two. (Eh… not so sure about that one.)

* After a series of the usual “holla!”s from evicted houseguests play on the loudspeaker, Derrick gets an unexpected shout-out from his wife and infant daughter. It ranks in the Top 5 Cutest Things I’ve Ever Seen, no doubt.

OK, your turn. Were you surprised to see Caleb leave the house before Victoria? Who stands the best chance at Part 1 of the final HOH competition? Which of Caleb’s tall tales made you laugh the hardest? Hit the comments with your thoughts!