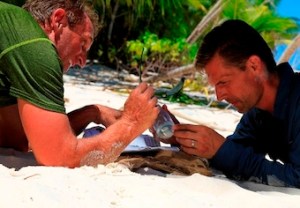 Discovery Channel has announced that on Oct. 29 — not long before Election Day! — it will premiere Rival Survival, an unscripted series in which “two real world political adversaries,” Republican Sen. Jeff Flake (Ariz.) and Democratic Sen. Martin Heinrich (N.M.), are marooned on a remote island for a week.

“Disconnected from the world on an uninhabited island surrounded by shark infested waters that mirror the seemingly treacherous terrain of the U.S. Congress,” the cabler’s press release reads, Flake and Heinrich — described as “polar opposites… often at odds in the Senate” — “must put their political differences aside and work together for six days and six nights to find common ground through compromise if they want to survive…. an utterly unforgiving deserted destination where the reefs alone are fraught with dangers that include venomous stonefish, lionfish and scorpion fish.”

Per Discovery, Sen. Flake is “a self-described reformer who attacks government spending and is vocal on hot-button issues like immigration reform. Last year, [he] and Sen. John McCain (R-Ariz.) were part of the “Gang of 8″ who teamed up to try to change immigration policies in the U.S.”

Heinrich, meanwhile, is “a member of the Senate’s Energy and Natural Resources Committee… a self-described conservationist and a strong progressive voice from New Mexico on issues that include education, health care and social security.”

I usually don’t bother writing about such “reality” programs, but this seemed ripe for discussion and/or amusement. (I’m also procrastinating on a larger project.) Your thoughts? Any tax payers from Arizona or New Mexico want to chime in?