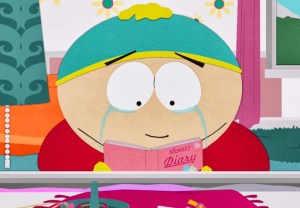 Comedy Central on Monday unveiled its fall premiere schedule, which includes the launch of South Park‘s 18th season and the return of Tosh.0.

Here’s the full rundown of the network’s premiere dates and times:

* Syfy’s Sharknado 2: The Second One will be screened in select theaters on Thursday, Aug. 21, accompanied by a special behind-the-scenes look at how the movie was made. A full list of participating theaters can be found on Fathom Events’ official website.

* TV Land has renewed Cedric the Entertainer’s The Soul Man for a 12-episode Season 4, to air in 2015. TVLine’s Cable Renewal Scorecard has thusly been updated.

* Meredith Baxter (Family Ties, Finding Carter) is joining CBS’ The Young and the Restless, according to TV Guide Magazine. Her character Maureen — described as “boozy” and well-connected — will first appear Monday, Sept. 8.

* Discovery has picked up America’s Smartest, a reality competition series that challenges contestants to solve difficult societal problems. According to The Hollywood Reporter, each episode will feature five contestants, then the finalists will face off in Episode 10. America’s Smartest is set to premiere in April 2015.