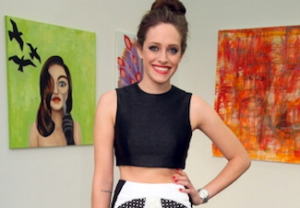 The actress will play Marlene, “a chain-smoking, striking hipster who also happens to be an expert at writing malicious malware — specifically, dangerous computer worms that take down entire networks.”

Earlier this week, 24 vet Rami Malek landed a lead role in prospective series, playing Elliot, a brilliant young programmer who suffers from “a debilitating anti-social disorder and decides that he can only connect to people by hacking them.” Elliot will “find himself in the intersection between a cybersecurity firm he works for and the underworld organizations that are recruiting him to bring down corporate America.”

Portia Doubleday (Her, Carrie) is also coming on board the project as Angela, “the pragmatic old childhood friend of Elliot and an account executive at the AllSafe Cyber Security firm” who happens to be the only person to whom our protagonist will share his vulnerabilities.

Excited to have Chaikin back on screen in a more dramatic role than the unsinkable Dalia Royce? Sound off in the comments!