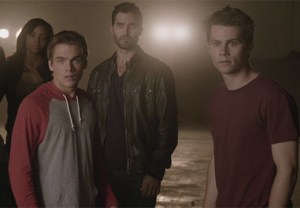 Below, executive producer Russell Mulcahy — who also directed the super-sized installment — talks about the episode’s biggest twists, and how they might affect the drama’s fifth season.

TVLINE | Let’s start with the ending. Argent leaving with the Calaveras felt oddly final. Could this be the end of the Argents’ saga?
I wouldn’t say that. Right from the beginning, our mantra was “sexy, scary and surprising,” and I think all doors remain open [for anyone to return]. All things are possible in Teen Wolf. TVLINE | One of those “surprises” was Derek’s evolution. Since that’s a new concept for the show, can you kind of explain what happened?
I think it’s what you want it to be. In the mythology, there are various interpretations, but he’s evolved to a different level. It’s a rite of passage, a natural evolvement in the mystery of the werewolf syndrome. It all comes from the mind of [creator] Jeff Davis; he’s brilliant, and he keeps me on my toes. There were bets going around about who the Benefactor was, and most of us got it wrong.

TVLINE | I’m also glad you didn’t kill off Braeden. Will her hunt for the Desert Wolf remain her top priority moving forward?
It could be. Next season is going to be a real eye-opener. We haven’t done too much planning, but from the hints I’ve heard of what’s to come, it’s going to be a really cool, interesting season.

TVLINE | The other mystery is what Parrish is. Do you know what he is?
[Laughs] I don’t. I think they’re still going through the bestiary, trying to figure it out. He obviously seems to be impervious to fire, and he has a good amount of strength. I don’t think he‘s even aware of what he is yet.

TVLINE | And he’ll have Lydia helping him. Do you see their relationship ever turning romantic, as a lot of the fans are hoping?
The chemistry seems to be really nice there. Whether that turns into a romantic thing, or just becomes a close friendship, I don’t know. But there’s definitely a bond that you saw in one of the final scenes of them together. It’s a very strong bond forming between them.

TVLINE | Lydia also spent much of the finale with Mason, and after what he saw, there’s no way he can pretend like he doesn’t know about the supernatural world. Will he be more in-the-know moving forward?
Oh, absolutely. It’s a bit like Stiles’ dad. Throughout the seasons, he went from being a regular sheriff in Beacon Hills to finally knowing about werewolves, lizard men, witches and whatever else. So his eyes have definitely been opened. TVLINE | Stiles had a funny moment at the end of the finale, where he got handcuffed to the desk; it made me miss the old, funnier Stiles. Might he return to his lighter side?
I don’t think it ever really disappeared, but I know he went to a really dark place in Season 3B. When he was possessed, we really saw his dark side. But that lighter side — and, specifically, the lighter side of Stiles and his dad — will continue.

TVLINE | Scott and Kira’s relationship is also a fan-favorite. Will you continue throwing new obstacles at them in Season 5, or might they actually get some alone time?
They care for each other and love each other very much, but you know, it’s still the early days [of their relationship], so there will always be new conflicts.

Teen Wolf fans, your thoughts on the finale? Hopes for Season 5? Drop ’em all in the comments section below.