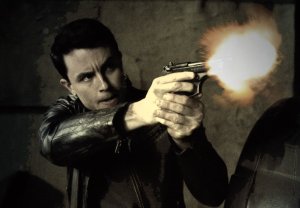 Monday’s Teen Wolf finale may have closed the book on Season 4, but for one fan-favorite character, a new chapter is just beginning.

RELATED Teen Wolf Season Finale Recap: Once Upon a Time in Mexico

“There are some big things coming up for Parrish next season,” actor Ryan Kelley tells TVLine. I’m excited about that.”

The Season 4 finale gave us our first taste of what’s to come during a conversation between Lydia and Parrish, in which she promised to help him figure out what he is once and for all. Below, Kelley dissects tonight’s major turning point for Parrish, and what the future might hold for him and Lydia.

TVLINE | OK, be honest: Do you know what Parrish is?
What’s crazy about Teen Wolf is that Jeff and the writers keep us in the dark for the most part. I did have the opportunity to find out what Parrish is, though. I had a sit-down with [creator] Jeff [Davis], and he asked me if I wanted to know, and I said, “Of course! Please, please, please.” I could tell he was super hesitant, so I was like, “Wait, do you want to tell me? Or are you just doing this because you feel bad for me?” He said, “I don’t really want to tell you, but I will if you want me to.” So I decided to wait. I had the opportunity, but I was too big of a baby. I could see he was struggling with it in his mind, so I said, “I’ll just let Jeff do Jeff. He can work his magic.” TVLINE | I’m sorry, what? I didn’t know a human being could be capable of such restraint.
[Laughs] For many, many, many weeks, I tried to trick Jeff into telling me what Parrish is. I kept saying, “If I know, I can play the character differently,” but I think that’s actually why he doesn’t tell us things ahead of time. He did mess with me a lot, though; he’d smile and look like he was getting ready to say something, then walk away, or pretend to answer a phone call. He messed with me all season.

TVLINE | You must have a theory, at least. Any guesses?
With Jeff, anything is possible. I was almost 99 percent sure I was a hunter in Season 3, so things can definitely change. One of the big theories people seem to be latching onto is that he’s a phoenix, just because of the ashes and the fire. I will tell you I don’t personally think he’s a phoenix, but I could be wrong. I don’t think it’s that simple, it just can’t be.

TVLINE | We don’t know, and you don’t know, but is it possible that Parrish knows?
I don’t know that, but in my opinion, I truly believe he doesn’t. I also hope he’s not evil; I’m just going to throw that out there. And if he’s not evil, there’d be no reason for him to pretend not to know what he is. He’s been asking a lot of questions lately. TVLINE | Parrish and Lydia definitely have a connection. Might that turn romantic in Season 5?
In the realm of Teen Wolf, anything is possible. And there’s definitely chemistry there; we’ve had some pretty cool scenes together. Whether it ends up being romantic, or just a friendship where he’s intrigued by her, we’re not quite sure yet.

TVLINE | I mean, crazier things have happened; this is Teen Wolf.
That’s actually a running joke on set. Whenever someone’s like, “I don’t understand why my character would do this,” or, “This feels awkward,” the director — or whoever — will be like, “Guys, this is a show about werewolves. Just do it.”

Teen Wolf fans, what do you think Parrish is? And are you hoping for a romance with Lydia? Drop a comment with your thoughts on the finale, as well as your best Season 5 theories, below.