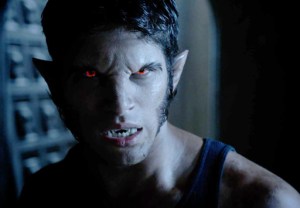 After sifting through Scott’s dirty man-panties — thanks, Stiles! — the gang tracked his musk all the way to the Temple of Tezcatlipoca (which I totally spelled right, according to Wikipedia). There were a few bumps along the way, like Liam going bananas and almost eating Stiles, but they eventually made it in one piece.

Of course, getting to Mexico was only half the battle. Within minutes of pulling up to the temple, Derek suffered a mortal wound — oh my God, why did he even go with them?! — forcing Braeden to stay behind and keep him alive. He managed to survive, and evolve into a black wolf, but I’m not sure I’d give Braeden any of the credit. (It was interesting to learn of her obsession with the Desert Wolf, though. Here’s hoping we finally see her next season.)

PETER AND THE WOLF | The rest of the pack confronted Berserker-Scott, who put up a pretty good fight, though he was no match for the soothing vocals of young Liam. After snapping out of Kate’s little spell, it didn’t take long for Scott to figure out Peter’s involvement in this hot mess of a season, cueing the fight we’ve been waiting basically two years to see.

“You were never an Alpha, Peter, but you were always a monster,” Scott said before striking the final blow. Sadly, he didn’t kill Peter, no matter how loudly I screamed at him to do so. (I’m starting to think he can’t hear me at all.) Instead, Peter was banished to the bowels of Eichen House, sharing a cell with none other than Mr. Third Eye Blind himself, Dr. Valack. FAMILY FEUD | Just outside the temple walls, an even crazier battle was brewing between Kate and the Calaveras. Despite taking a bullet from her own brother, Kate managed to weasel her way out of the fray, but not before spouting a bunch of nonsense about how Scott and his pack “killed Allison.” Ultimately, Argent decided to stay with the Mexican mobsters and continue the hunt for Kate. (But the real question is: Will he keep his beard?)

GET A CLUE | Meanwhile, back at Beacon Hills High, Mason was forced to attend a class he did not sign up for: Berskerers 101. After helping Lydia and Sheriff Stilinski blow one of those suckers to pieces, there’s no way he can play dumb to the supernatural goings on moving forward. That said, I guess that makes him the new Danny, which means he’s probably going to mysteriously disappear between now and Season 5. (It’s the Teen Wolf way, after all: If you start to become too interesting, you gots to go!)

And then there’s Deputy Parrish, who’s finally going to figure out what he really is, with a little help from Lydia and her bestiary. (Any guesses? Ryan Kelley has a few.)

Teen Wolf fans, did Season 4 end the way you anticipated? Obviously you’re glad Derek is alive and well, but do you wish Peter and Kate had been killed? Drop a comment with your review of the finale below.