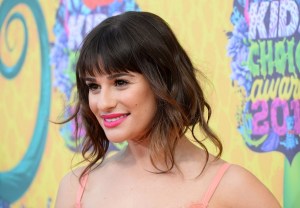 There was little trace of Rachel Berry when Lea Michele graced the Sons of Anarchy set last month to shoot a Season 7 guest appearance, and that was the whole point.

SOA creator Kurt Sutter tells TVLine that the Glee actress went au natural for her role as a “simple truck-stop waitress” who has a run-in with Katey Sagal’s Gemma.

“I’m just now doing post-[production] on that episode, and she’s great,” raves Sutter. “She completely went there. Not a stitch of makeup. She’s just a frumpy waitress. She really got it and embraced what the show was. I’m thrilled.” SOA exec producer/director Paris Barclay — who has helmed some of Glee‘s biggest episodes — was instrumental in bringing Michele on board. “He’s really close to all those actors, and really helped them through their time of need,” explains Sutter. “And I knew she was a big fan of the show, and we had this role that opened up. It was sort of a one-off and I knew we’d be able to get her in and out in a day. And the timing worked for her. She was thrilled.”

Sons of Anarchy returns to FX on Sept. 9 at 10/9c with a super-sized hour-and-45-minute premiere. Michele’s episode is slated to air in October.