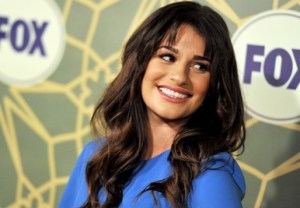 Glee star Lea Michele announced via Twitter today that she’ll appear in an episode of the seventh and final season of FX’s gritty biker drama — which happens to be her “favorite show,” she added.

TVLine has learned that Michele will appear in the Oct. 14 episode as Gertie, a truck stop waitress and single mom who connects with Gemma during a difficult time.

Michele later Tweeted a photo of herself and director Paris Barclay on the Sons set:

Showrunner Kurt Sutter had promised to announce a “fun guest star” during Sunday’s Sons panel at San Diego Comic-Con, but never ended up dropping a name.

Sutter did, however, point to a final arc that will feature Charlie Hunnam’s Jax “inciting chaos”; he also noted that there have been “serious talks” about a Sons prequel series or miniseries.

Two other previously announced guest-stars for Sons‘ final spate of episodes — Courtney Love and Marilyn Manson — have musical backgrounds, too. Back in Season 5, another actress who rose to fame in a teen-oriented musical role — High School Musical‘s Ashley Tisdale — guested on Sons as an elite escort.

Michele’s Sons gig comes as she prepares to film an abbreviated sixth and final season of Fox’s high-school musical Glee.

Sons of Anarchy returns to FX on Sept. 9 at 10/9c with a super-sized hour-and-45-minute premiere.