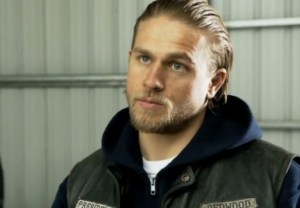 What doesn’t send you to the grave makes you stronger. So, perhaps Sons of Anarachy showrunner Kurt Sutter (and a handful of his characters) will develop superhuman strength when FX hit wraps filming on its seventh and final season later this year.

“Eighty-nine percent of my family think that this season will kill me,” Sutter noted during the show’s panel Sunday at San Diego Comic-Con.

Odds are even higher, though, that several series regulars will perish before the tale of SAMCRO’s not-so-merry band of criminals concludes.

Here are a few of the panel highlights:

JAX IN A BOX? | Is the fate of Charlie Hunnam’s flawed hero already decided — and if so, how grim will it be? “I know where I want our hero to be emotionally and thematically at the end of the season, but I try to keep a loose grip on the story process so we can get there in an organic way,” explained Sutter, who is currently writing the seventh script of the final season (and is in post-production on Episode 4). “I can never tell what it’s going to look like or how we’re going to get there, and that’s part of the fun.” Actor collaboration, the showrunner added, does play a role in how story arcs develop.

Whatever Jax’s fate, though, Sutter noted that Season 7 will be “the most proactive our hero has been throughout the entire series… This season he comes out with blinders on, singular in purpose. Rather than being the reactor to chaos, he is the inciter of chaos.”

HOW DO YOU PLAY A PROBLEM LIKE GEMMA? | “It’s an awesome thing… as an actor to be actually saying words and thinking different words,” explained Katey Sagal, when asked about her villainous matriarch. “Any time she is relating to her family, her son, her love for Nero, there’s a certain vulnerability about her that really offsets that hard ass edge she has exterior-wise. She’s going to be even more multilayered this season as she tries to hold together what she does in the name of really protecting her family one more time.”

Sagal added that Gemma is “always about what’s the best thing for the kids – that’s kind of her thought and her motive, and she’s continuing to try to do that. As you’ll see, what transpires from that somewhat pure motivation just kind of goes awry.”

LOVING LOVE | Sagal noted that high-profile Season 7 addition Courtney Love “did a very good job” in their scenes together, and “looked very different from what we have known as Courtney.”

GETTING BOOKED | Sutter noted there are “serious conversations” being had about a Sons prequel, but in the interim, there are comic books and a full-on novelization definitely happening. The latter, titled Bratva, is expected this fall — with a storyline set sometime after Season 4 that finds Jax, Opie and Chibs getting into “gnarly things” with the Russians. “If it does well I’m hoping like William Shatner I will continue to flourish as a guy who has other people write s**t and slaps his name on it,” the exec producer joked.

Whatever future Sons has on TV, though, it won’t be a spinoff, Sutter added. “Spinoffs work well, obviously, in procedural dramas, which this is not,” he said. “To me, the most interesting thing about our mythology is the origins, but because we don’t do flashbacks on the show the prequel will be about the origins between John Teller and Piney Winston. My sense right now is that I don’t know if it’ll be a full-on series. It might be a miniseries. Our hope is that we’ll let the mythology rest for a couple seasons and then do the prequel, so we’re having conversations about that.”

TRAILER TERROR | “That trailer scared the hell out of me,” said Dayton Callie, who plays Chief Wayne Unser, speaking about a dialogue-free montage set to The Association’s “Never My Love” that began with a scene of an inmate being held down and beaten by a pair of assailants — one of them being Jax. Other teases? Gemma and baby at home, getting the kids off to school in mundane scenes of motherhood. The Sons driving down the road on their bikes — led by Chibs. Juice doing pushups. Wayne putting flowers on Tara’s grave. Wendy packing a bag. Nero Padilla and the Mayans drinking beer. And then, another flash of Jax’s violence, as he cuts a swastika into his victim’s stomach and yanks out two of his teeth.

AN EMOTIONAL ADIEU | Following a two-minute standing ovation from the audience and cast, Sutter jokingly shouted, “Sit the f–k down. I’ve got an image!” Ultimately, though, the EP got choked up, adding “We’re just one big f—ed up family, and this is such a bittersweet experience… The thing I’m most grateful for is I walk through our set and I know that everyone wants to be there, and everyone’s really grateful, and everyone really likes the show that there working on. And that’s the gift for me. So thank you.”