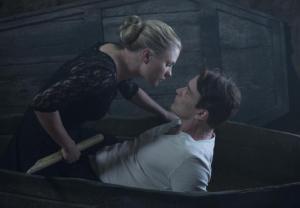 THE EPISODE | “Thank You”

True Blood’s series finale may have been divisive — the fan war continues to rage — but there’s no two ways to look at Paquin’s heartbreaking final performance.

Sunday’s episode found Sookie Stackhouse bouncing between both ends of the emotional spectrum, as she first struggled to accept Bill’s death wish, then helped him grant it, only to ultimately move on and find happiness with someone new.

The panic Sookie experienced when she discovered she could hear Bill’s thoughts — though that was never fully explained — was felt by the audience, who shared in her concern for the suicidal vampire.

Her speech to him, as he was lying desperately in his grave, was probably the most intense performance we’ve ever seen from a fairy princess holding a ball of deadly light. And the aftermath, the sight of Sookie bawling in a heap of Bill’s goopy remains, was simply devastating. Paquin has always excelled at selling the Bill-Sookie romance to the audience, so it was only fitting that her biggest moment was also the couple’s last.

Bill’s justification for meeting the true death may have had cracks, but there was nothing flimsy about Paquin’s performance.

HONORABLE MENTION | Julia Louis-Dreyfus and Bryan Cranston may have won their 2014 Emmy Awards — as Lead Actress in a Comedy Series and Lead Actor in a Drama Series — fair and square. But make no mistake, with their crazy-committed and utterly hilarious podium shtick, they pulled off a felony-level theft of positive buzz during the often low-key telecast. Louis-Dreyfus kicked off the bit by telling Cranston that he reminded her of an actor who played her dentist love interest back in her Seinfeld days, then blithely ignored the Breaking Bad star’s efforts to convince her that he was, in fact, the guest-star in question. But the duo wasn’t about to settle for merely upgrading their delivery from the usual “straining off cue-cards” brand of awards-show presenting. Later, when Louis-Dreyfus made her way back to the podium to collect her third straight trophy for Veep, Cranston “ambushed” her with a smooch so long and passionate, it was practically sponsored by Harlequin. “Yeah,” the actress said all woozily as Cranston stroked his lips in comically sensual triumph, “he was on Seinfeld.” And here’s hoping he’ll snag a Season 4 arc on Louis-Dreyfus’ HBO comedy, as well.

RELATED  Emmys 2014: The 20 Best, Worst and Most Inappropriate Moments

HONORABLE MENTION | We here at TVLine don’t throw around the words “scary as [bleep]” lightly, so when we use those words to describe Billy Magnussen in the finale of WE tv’s excellent The Divide, trust us – that’s exactly what he was. As the noose tightened around the neck of his character, homicidal junkie Eric, the rising star delivered a performance that was twitchy, manic and terrifyingly believable. Never mind the brutality of the double murder Eric committed upon realizing he was being set up, it’s the uncorked rage that his portrayer displayed in his final scene – when the killer attacked Christine with the force of a charging bull – that’s going to give us nightmares.