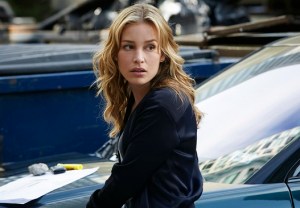 Warning: The following contains spoilers from Tuesday’s midseason finale of Covert Affairs. If you have yet to watch, head to a different TVLine story. Everyone else, read on…

Annie Walker has a new enemy.

On Tuesday’s Season 5 summer finale of Covert Affairs, the spy discovered that McQuaid Security’s Caitlin and diplomat Belenko framed her new love interest Ryan — not to mention shot him. While Caitlin bit the bullet, Belenko is still in play, and possibly targeting Arthur.

TVLINE | Given how many cliffhangers you have at the end of the finale, is it safe to say that the next episode picks up immediately after?
MATT CORMAN | More or less, yeah. Shawn Doyle’s character, Belenko, talks about Istanbul, and the action picks up there right away, basically.

TVLINE | Belenko tried to blow up the car that Arthur was in. Is he specifically targeting Arthur or is this part of a larger plot?
CHRIS ORD | You were right to pick up on the fact that he was aiming for a target. There’ll be plenty of mysteries surrounding what that target is going forward. We’ll reveal that in the next six [episodes].

TVLINE | Is it just a coincidence that Arthur has moved over to McQuaid’s company and now he’s being targeted by Caitlin and her cohort?
CORMAN | In a good way, you’re reading into a lot of things that may or may not be there. So you’re looking at these episodes with the right kind of lens, which is conspiracies could be around every corner. But we don’t want to give away too much.

TVLINE | Is Annie’s resignation going to stick? Is she going to remain at McQuaid’s company?
ORD | In the short term, yes. Certainly, her quest going forward revolves around what we’ve seen this summer season. So regardless of where she’s working, she’s always going to be seeking out the truth and trying to bring about justice. So you don’t necessarily need a title to support that. TVLINE | I think we can say that McQuaid is probably going to survive, right?
CORMAN | Well, you don’t want to give it away, right? [Laughs]

TVLINE | You wouldn’t add Nic Bishop as a regular and kill him off so soon!
CORMAN | Well, you never know on Covert Affairs. But he’s getting good medical care. But he was shot. … I think he’s in stable condition when we find him.

TVLINE | Caitlin’s dead, McQuaid is in the hospital — is there a power vacuum or power struggle at his company when you pick up?
ORD | There’s certainly a power of vacuum. Whether there’s a struggle is another question. Arthur’s the most senior executive left standing at the company. Despite having been the DPS, he’s not super Machiavellian like Henry Wilcox was. But with the same respect, he’ll find himself assuming a role that he didn’t expect to assume when he came on.

TVLINE | What effect is Annie’s lying going to have on her relationship with Auggie? Are they even friends at this point?
CORMAN | Oh, yeah. They have had their ups and downs, but they both are spies and they recognize that the truth can and sometimes needs to bend a little bit. What’s great about Annie and Auggie is they do deeply care about one another, and even when there’s lies or omissions, that’s something they both want to work through and talk about. But it’s a challenge. Anytime there is a lie between two people and trust is compromised, it’s a big deal.
ORD | And there will be events that unfold in the fall season that will take those challenges and amplify them by orders of magnitude. TVLINE | There’s been a real push this season with Annie and Auggie back to a place where they’re just true partners and friends. Have you ruled out a return to a romantic relationship?
ORD | Never. [Laughs] That relationship’s the bedrock of our show. There’s so much between them that is meaningful that’s always going to be there, whether they’re just simply working together or doing more together.

TVLINE | Is Calder actually going to be able to get Sydney to help him? She seems a little bit reluctant given some of what’s transpired between them.
CORMAN | He’s a pretty convincing guy though, and that story with him and Sydney is going to continue to evolve and take on new layers. The short answer is, yes.

TVLINE | You’re opening the door here for a bigger conspiracy plot. Can you talk about some of the new players we might be seeing ?
CORMAN | We’ve met Shawn Doyle already, who plays Belenko. What I think will be compelling to fans is it is both a bigger conspiracy, but it will also drive back, in a very intimate way, to our characters. So it’s not getting bigger. It’s getting more intense.