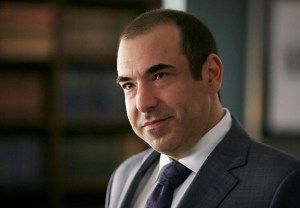 Warning: The following contains spoilers from Wednesday’s midseason finale of Suits. If you have yet to watch, head to a different TVLine story. Everyone else, read on…

The secret is out!

On Wednesday’s midseason finale of Suits, Louis finally caught onto the fact that Mike didn’t go to Harvard and that his colleagues have been covering for the faux lawyer. It was a reveal that even surprised executive producer Aaron Korsh, who admits below that the twist was not always in the books for this episode.

With Louis demanding name partnership from Jessica in return for his silence, the drama will return for the back half of Season 4, tackling “head-on” the aftermath at Pearson Specter, previews Korsh. The EP also addresses the state of Donna and Louis’ friendship and Mike and Rachel’s romance.

TVLINE | It was such a difficult season for Louis, both professionally and personally. Going into it, did you set out to test him?
No. Not necessarily. I don’t think that we set out to put Louis through the wringer in the way that we did. It just emerged and happened that way. We set out to explore what happens when Mike leaves the firm, and various events conspired to lead to this conclusion. We have a road map at the beginning of the year, but then we always veer away from that road map and discover interesting and new things.

TVLINE | What were some of the surprises that you discovered along the way this season? What came up that wasn’t initially planned?
We definitely didn’t know that Louis was going to do a dirty deal with Forstman. We didn’t know that Louis was going to hire Mike back at the firm. We didn’t know that Louis was going to discover Mike’s secret. [Laughs] These things all emerged. What was funny was we had a different way in the beginning of the year of getting Mike back to the firm and when we got there, the details of that different way, which I won’t get into, just became… They were not ultimately satisfying to us. A long time ago, I thought the way to get him back would be having Louis hire him back and Jessica would not be able to, obviously, tell Louis why she was banning him from hiring. So that all came together somehow. We re-remembered that idea and used it in the end.

And then when Louis got fired, we definitely were mulling over [the idea that] he leaves the firm for six episodes and he goes and hooks up with Hardman or he hooks up with Forstman. We explored all those things, and we just thought, if we did that, that was going to be a major firm battle in the last six. When Donna left, we kept her gone for a long time. When Mike left, we kept him gone for a long time. Everybody’s going to think Louis is coming back. I thought everyone would think that, but I thought they would all think it would take a long time so we decided, “Hey, let’s do it quickly and try to throw in a surprise there.” I don’t know if it was successful or not, but the idea in the season finale was to explore Louis a little bit and not see it coming that he discovers Mike’s secret in the end and then he’s going to come back. TVLINE | But he’s coming back to the firm under pretty tense circumstances. Jessica’s not the type that likes being put into certain positions. He now knows about Mike’s secret, what Harvey and Donna did. How does that change the atmosphere at Pearson Specter?
My initial answer is, I wish I knew, Vlada. [Laughs] Because we’re scrambling to figure it out as we speak. Jessica does not take kindly to being threatened. We’ve definitely established that. On the other hand, if someone’s pointing a gun at her from 10 feet away right at her head, she’s not going to run at them just to get a bullet shot in her brain. So she’s in an interesting position, as is Harvey, Mike, Louis, Donna and Rachel.

I used to work on Everybody Loves Raymond. I was an assistant there. That’s where I learned the craft of writing to a large degree. When I was a PA, just getting people coffee, I was listening to Phil Rosenthal, the creator of that show, answer a question in a panel. Somebody asked why they don’t do B stories in that show. They only ever have just one story, and the answer was that everyone on the show is so connected to each other and so integrated into each other’s lives that any event is going to affect all of them, so they don’t have to have separate story lines. Now, we do because we’re an hour-long show and we’ve got a lot of cast and we need to have separate storylines. [But our characters] are all so intertwined. Think about it – it’s Mike’s secret, which affects Harvey and Jessica and Donna. But it also affects Rachel because, obviously, she’s with him, and Louis cares about Rachel. Louis cares about them all, they all care about Louis, but he’s feeling betrayed. There’s a lot, obviously, to get worked out in the last six [episodes], and we come back tackling the problem head-on. TVLINE | The scene between Donna and Louis was so heartbreaking. Is there any hope for that friendship to be mended?
[Laughs] Well, it is Suits, you know. You can almost look at it like they’re a family — maybe a little bit of a dysfunctional family, but a family, and Louis is feeling utterly betrayed and heartbroken and angry. He has a leg to stand on in his feeling that way. He’s justified feeling that way. On the other hand, Donna and he did have a powerful friendship. It wasn’t all based on a lie and she’s going to fight to make him understand that.

TVLINE | When Robert Zane brought up marriage, that seemed like the furthest thing from Mike’s mind at that moment. Is it just that it’s too early in their relationship or is there still tension between Mike and Rachel going forward?
In our mind, it’s more that this was not the purpose of him coming there, so he was just kind of thrown for a loop with Zane asking him that question. It was also a forward thing for Zane to say, though Zane does do things like that. But it’s a good question. I wouldn’t say it’s the furthest thing from his mind, but yeah, there’s no doubt they’ve just gone through a lot of strife and I don’t think it was at the top of his mind.

TVLINE | Would you say Mike and Rachel are in a good place now?
I feel like we’ve tried to make them in a better place and these things can always come up. Part of the reason it came up in [Episode] 9 was some of us writers, and I think maybe even actors, felt like it might have been he forgave her too easily in eight. I think the way forgiveness works is you can make a decision to forgive someone, but it doesn’t mean the thought of what they did isn’t going to pop into your head from time to time and you’re [not] going to take it out on them again. It’s a process. So I like to think that they’re in a better place now, but it remains to be seen. We haven’t really figured that out yet in the back six.