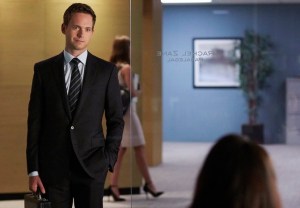 Now that Mike is back at Pearson Specter in Wednesday’s episode (USA Network, 9/8c), he’ll be working his legal magic “on right side of the fence again,” star Patrick J. Adams assures TVLine.

But will the people he hurt, like Louis, grant him forgiveness? How will he handle being in the same office as his ex-girlfriend Rachel? And can he even be Harvey’s associate? (Remember, Rachel currently has that gig.)

Below, Adams weighs in on those burning questions and more, including his hopes for an Orphan Black return (#JesseSavesHelena).

TVLINE | There’s been a lot of debate in our comments section about Mike’s behavior this season. How do you feel about his arc?
I really loved it because it was doing something different. Mike really got to stretch himself a little bit, get himself out of his comfort zone and try something new. Ultimately, it was all there to service his realization that being an investment banker is not what he was put on this earth to do. He really needs to be a lawyer and that’s what drives him.

But it’s important for characters to grow and change and evolve and even make mistakes, and it’s been fascinating to see how the audience has reacted to some of those changes. It’s always so vehement, but it also makes me laugh because that’s why people tune into television, to see characters they love stretch and try new things and sometimes really make big mistakes and then learn from them. The reaction of people to Mike is, ultimately, really good for the show because it’s representative of the risks that we’re taking and the fact that we don’t want to sit by and do the same thing every week.

TVLINE | Mike did some questionable things, hurting Louis, getting into arguments with Harvey. Were you ever worried that maybe he was crossing the line and that you couldn’t pull him back?
I never had any fear that we couldn’t pull him back. In fact, I kind of ran – especially in my interpretation of the script – I ran to crossing the line because I just think it’s more interesting. I found it really fascinating that so many people took umbrage with the fact that he would do what he did to Louis because what he did to Louis is nothing different than what Harvey has done to Louis almost every episode of Suits. … I think it’s interesting that it’s less about what Mike did to Louis or the arguments that Mike got into with Harvey. It’s more that people are just worried about Mike — which I think is a testament to the show and to the writing and to the character — that they just don’t want him to go somewhere where, like you said, he can’t return from. But what’s going on [right now] is proof that, at the end of the day, Mike made a lot of mistakes and hurt a lot of people and he feels really terrible about that. As soon as people see that he realizes what he’s done and why he’s done it and that it didn’t work out, there’ll be nothing but forgiveness for him.

RELATED TVLine Mixtape: Your Favorite Songs From Chasing Life, Suits, Gracepoint, Under the Dome and More

TVLINE | Now that he’s back at Pearson Specter, is there forgiveness to be found from Louis and Jessica and all the people he may have alienated?
It’s different for every character. Obviously, Jessica, being the head of the firm, is going to have a vested interest in keeping Mike Ross out of that firm and not wanting to accept him back. So Mike has an uphill battle with her. Harvey, on the other hand, wants him back really badly. He realizes that he’s better at his job when he has Mike around and that he wants him back and he wants him to be OK. Louis and Mike are always going to be going back and forth… Ultimately, no matter what Mike’s done, we know he’s a moral character and he’s really just trying to learn and grow and be the best person that he knows how to be. Sometimes, he’s going to trip up like all of us. That’s what we’ve done this season, but towards the end of this season, you’re already beginning to see Mike come back into focus and be on the right side of the fence again and doing what he does best, which is helping Harvey do what he does and getting the firm back on track.

TVLINE | Is the relationship between Mike and Harvey back to what it was?
Again, Gabriel [Macht] and I are both, really, always trying to drive forward, so rather than thinking of things going back to what was, it’s like, “Well, what happens next?” There’s obviously a comfort in a friendship that’s rekindled. They’re back on the same side, but there’s also been eight episodes of Mike really going toe-to-toe with Harvey. Even though at the end of the day he lost this battle, he’s proven that he can hold his own against Harvey. There were a lot of little battles along the way that he kept winning that Harvey did not expect him to. So that changes their dynamic a little bit and might make Harvey trust Mike a little more, give him more responsibility. [They have] less of a mentorship relationship and more of a real partnership where, slowly, they’re becoming more equal. TVLINE | Rachel is Harvey’s associate now, and Mike has proven himself. So has he been promoted?
We kind of sidestep it a little bit. When he does return, it’s made clear that Rachel is still in that power position with Harvey and she’s still doing a lot of that work. Obviously, Mike is going to end up getting the brunt of it because they’re the team and Harvey trusts Mike implicitly. Moving forward, Mike will also be getting cases from other people and his responsibility, in general, is going to be upped a little bit. And of course, he’s always got to be watching his back and making sure he’s not leaving room open for Jessica to get him out of there. That’s the danger he always lives with. You’re going to find that there are larger threats outside the firm that force everybody to come together and work together rather than try and fight between each other.

TVLINE | Is Mike still living with Harvey?
I don’t want to spoil anything, but there are a couple of really good scenes where we deal directly with that in this next episode and we get to see how Harvey really feels about their relationship. We begin to see what the next steps for Rachel and Mike are going to be. There’s a lot of interesting stuff to be played there in the wake of a betrayal. These are two people that have been really doing nothing but falling in love for the past few years. Now, you’re going to get to see them faced with something that a lot of relationships in the real world are faced with. So I won’t tell you where he’s sleeping at night. You’ll get a lot of interesting stuff in the next couple of episodes.

TVLINE | What’s the workplace dynamic like between Mike and Rachel given everything that happened?
Prickly, at best. Mike has made clear that he just needs his space to think about what happened. After the fight with Logan, he’s trying not to act irrationally. He’s trying to give himself some breathing room to figure out what happens next, which is a slightly more evolved and mature version of Mike. That fight was a moment for him where he realized he just needed to grow up a bit. So obviously, they’re passing each other in the halls and she’s doing his best to make amends. The next episode, specifically, you get to see what a struggle that is for both of them and where they plan to go from that point on. There’s not a lot of working together, there’s more Mike trying to avoid dealing with that. TVLINE | I was so pleasantly surprised and delighted by your Orphan Black guest spot. The character and interaction was not what I was expecting at all.
Yeah, that’s what we were going for. I told them that I would do anything to be on the show – whatever. I just wanted to work with [Tatiana Maslany] and support the show as best I could. When I saw the part come up, I thought, “This is going to be a really fun, strange thing to do that’s very different from what I get to do the rest of the time.” She’s just such a tremendous actor and to get to play off against what I think is her most extreme clone was a treat. It seems like something that the fans really enjoyed, as well. I had a great time. I tweeted my way onto the show in the first place. Now I’m trying to tweet my way back on the show, start a “Bring Jesse Back” movement.

TVLINE | I was going to ask you if we should start the Twitter campaign now.
Yes. I haven’t figured out the hashtag yet. I’ll let the fans decide. The Internet is far more creative than I am. But I’ve already got a lot of tweets, social media support. People really seem to really want Jesse to come back and help Helena out of her rut, and it would be an honor to do so. Hopefully, that’s something the writers are interested in doing.