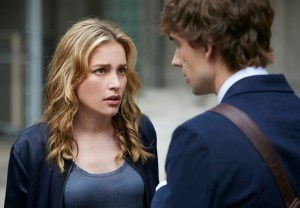 Annie and Auggie are being put through the wringer.

On tonight’s Covert Affairs Season 5 summer finale (USA Network, 10/9c), the duo will have to contend with not only Annie’s lies — about the new guy in her life! — but also the return of Auggie’s ex-girlfriend.

Here, executive producers Matt Corman and Chris Ord preview the tough choices ahead for Annie and the extent of her feelings for Ryan McQuaid. The EPs also reveal a surprising future for onetime lovers Annie and Auggie.

TVLINE | It’s been a different kind of season, especially with the introduction of Ryan. How are you feeling about how that character has integrated into the show and the fan response?
MATT CORMAN | Oh, it’s been great. It’s always a little scary when you introduce a character that’s going to be so integral to the show and has the potential romance with your lead. It’s a big swing, but Nic Bishop has been fantastic, and it’s been fun to see the fans slowly wonder about him or warm to him or still question him. They’re engaging in the exact right kinds of ways because Annie herself is trying to figure out what to think of this guy.

TVLINE | How fully does Annie trust that Ryan’s telling her the truth about being framed? Is there any doubt that we see in the finale?
CHRIS ORD | There may be, but what Annie trusts more than anything in her line of work is her gut instinct. It’s always served her well, and she felt her gut was telling her to let him go at the end of the last episode. She may have moments of doubt, but at the end of the day, that’s all she can rely on. TVLINE | How deep are her feelings for Ryan at this point?
CORMAN | Any time your trust is so deeply tested, it gets deep quickly. She’s having to make moral judgments about this guy at a time in a relationship where you might be just trying to figure out whether you’d go on a second date.

TVLINE | It’s causing her to lie to Auggie and keep things from him once again. How is that going to affect their relationship?
ORD | It certainly affects it in a big way in the summer finale. Look, the spy game is hard. It puts you in positions to lie that you don’t want to be in, but you for the sanctity of the mission, you need to do it. They both recognize that. That doesn’t make it any easier, and their relationship will be tested going forward in ways that you’ll expect and ways that you definitely won’t expect.

TVLINE | In the preview, we see that Haley (played by Amy Jo Johnson) is back. What does that mean for Auggie?
CORMAN | It’s complicated. Their relationship has been challenging for him, and she’ll play an important little role in this episode for him, personally, but also, she has a kind of integral part in the plot.