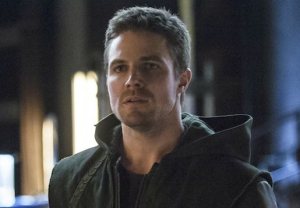 Toward the close of Arrow Season 2 — and as part of Susanna Thompson’s final appearance as Moira Queen — it was revealed that, unbeknownst to Oliver, he has a child out there, somewhere.

So, when will said offspring resurface?

RELATED Arrow Casts Wildcat — Will He Train Laurel to Become the New Canary?

In the episode “Seeing Red,” we learned via flashbacks that when Ollie was a care-free billionaire playboy, he got a young woman pregnant. Moira met privately with the (conspicuously unnamed) lass to strike a deal: a cool $2 million in trade for her lying about losing the baby and then putting Starling City in her rear view mirror.

Though it was previously suggested that the paternity secret, which in large part died with Moira, would be revisited as early as Season 3, Oliver may have to wait longer to learn of and/or meet his long-lost progeny.

RELATED Arrow Casts Felicity’s Mother — For Real, or For Flashback?

Likening the situation to that of Felicity’s backstory — which until now has barely been teased but will finally be explored this fall — Arrow showrunner Marc Guggenheim explains to TVLine, “Half of our job is coming up with ideas, and the other half is exercising judgement in terms of the right time to play those ideas.”

So in addition to ensuring there is room both on the canvas and within the narrative to circle back to Oliver’s kid, “We also need to have that moment happen in the right context. So is it Year 3, is it Year 10…? I don’t know,” Guggenheim says. “We’ve put it out there and we’ve got some cool ideas about where to go with it, should we do it, but we haven’t committed to actually doing it or even when to do it.”

How soon would you like to see Arrow bring back Oliver’s child? And to what end? And could said offspring turn out to be anyone but Connor Hawke?