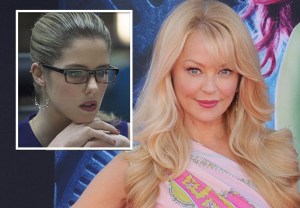 RELATED Arrow Casts Wildcat — Will He Train Laurel to Become the New Canary?

As revealed at the San Diego Comic-Con last weekend, the fifth episode of Season 3, titled “Oracle,” will shed light on Felicity’s unexplored past, including her time at MIT. With Arrow returning Oct. 8, that places the flashback episode at the start of November sweeps.

As hinted in Season 2’s “City of Blood,” Felicity — abandoned by her father at a young age — has measured regard for her mom. “If I had accepted things, I would be a cocktail waitress in Vegas like my mother and I never would have gone to college and I never would have moved a thousand miles away to work at Queen Consolidated,” she shared.

With Ross’ casting, viewers stand to gain more insight into the complicated mother/daughter dynamic. “We have had a backstory for [Felicity] for over a year now that we keep saying, ‘This is the episode where we’re going to do it,’ and we don’t,” exec producer Marc Guggenheim told TVLine. “But this is the year we’re going to do it.

Ross’ other previous TV credits include Hit the Floor, Nashville, Glee and Days of Our Lives (as Eve Donovan, who is now played by Kassie DePaiva).