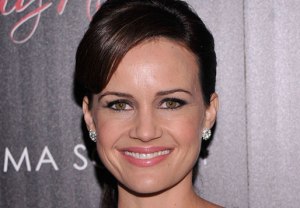 Carla Gugino is on The Brink.

The Brink focuses on a geopolitical crisis and its effect on three disparate and desperate men. Gugino will play Joanne Larson, a Washington lawyer in the prime of her career, who proves a formidable match for her Secretary of State husband (played by Tim Robbins). Jack Black and Pablo Schreiber (Orange Is the New Black) also star.

Gugino can next be seen on Wayward Pines, Fox’s midseason drama helmed by M. Night Shyamalan.

* Jake Lacy (The Office, Better With You) has landed a recurring role on Girls‘ fourth season, though details of his character are not yet available, according to Entertainment Weekly.

* Turner Classic Movies will celebrate Lauren Bacall with a 24-hour marathon of the late actress’ films, beginning Monday, Sept. 15, at 8/7c. The marathon will include all four of Bacall’s films with husband Humphrey Bogart.

* Comedy Central has given a pilot order to Gettin’ Some Strange with Kurt Braunohler, a late-night talk show that covers the weirdest stories of the day, Deadline reports.

* Following the cancellation of her Nickelodeon sitcom Sam & Cat, Jennette McCurdy has launched What’s Next for Sarah?, a web series written by and starring the actress. Per The Hollywood Reporter, McCurdy plays the titular Sarah, a former child star who must now figure out what to do with her life. Available episodes can be viewed here.