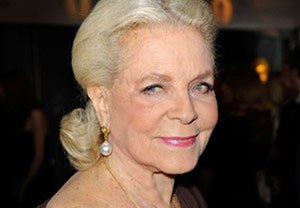 The estate of her onetime husband Humphrey Bogart confirmed the news, first reported by TMZ, via Twitter.

IN MEMORIAM Robin Williams Dead at 63 in Suspected Suicide

Born Betty Joan Perske in New York City, Bacall studied at the American Academy of Dramatic Arts after high school. At age 19, she first made her mark by landing the role of Marie Browning, opposite Humphrey Bogart, in 1944’s To Have and Have Not — the first of many on-screen pairings for the actors, who would marry the following year and stay together until Bogart’s passing in ’57.

Bacall’s perhaps most lauded film role was in The Mirror Has Two Faces, which netted her numerous accolades including Golden Globe and SAG awards and an Oscar nod. In 2010, she collected an honorary Academy Award in recognition of her “central place in the Golden Age of motion pictures.”

IN MEMORIAM Another World Vet Charles Keating Dead at 72

Her TV credits included a 1973 TV-movie adaptation of the Broadway musical Applause (in which she reprised her Tony-winning role and in turn earned her first Emmy nomination), Dr. Kildare, an arc on The Rockford Files (scoring her second Emmy nod) and Chicago Hope.

Most recently, this spring she voiced the flirty best friend of Peter’s late mother on Family Guy.

One of cinema’s most famous bits of dialogue, delivered by Bacall in To Have and Have Not: