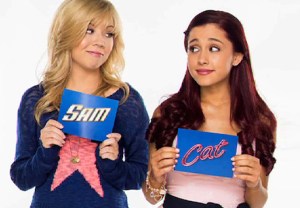 Nickelodeon has pulled the plug on Sam & Cat, with a handful of episodes from the series’ 40-episode freshman run left unproduced.

RELATED Meet the Descendants of Maleficent, Cruella and Other Big Bads

A crossover spin-off of Nick’s iCarly and Victorious, Sam & Cat starred Jennette McCurdy and Ariana Grande as roommates who start a babysitting business.

“Nickelodeon will not be producing more episodes of Sam & Cat,” the network said in a statement. “We are very proud of the show and its very talented cast and we wish them all the best.”

Production on Sam & Cat‘s freshman run was mysteriously halted in April, shortly after racy lingerie pics of McCurdy leaked online, as well as in the wake of reports that McCurdy and Grande were at odds over the latter allegedly commanding a larger salary.

McCurdy fueled such speculation by being a no-show at this year’s Kids Choice Awards, where Sam & Cat scored a top prize, and then explaining her absence on Twitter thusly: “I was put in an uncomfortable, compromising, unfair situation (many of you have guessed what it is) and I had to look out for me. I chose to not go because sticking up for what is right and what is fair is what my mom taught me is ALWAYS the most important thing.”

Soon after, Grande herself took to Twitter to claim, “The rumors circulating about our contracts and our salary not being equal are absolutely ridiculous and false.” As for the hiatus, Grande added, “I don’t know what’s happening because I’m not directly involved with the problem.”

A rising pop star, Grande’s hit single “Problem” rose to No. 2 on Billboard’s Hot 100. She also was the recent subject of a one-day Total Request Live “revival” on MTV.