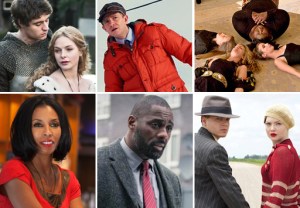 Brace yourselves for Emmys 2014: Return of the Miniseries!

Indeed, after putting the “Oustanding Miniseries” category on ice from 2011-2013 — in favor of a broader “Outstanding Miniseries or Movie” division —  the Academy of Television Arts and Sciences has decided to once again differentiate between multi-night events and one-night-only affairs.

Perhaps that’ll be good news for FX’s American Horror Story anthology — a bridesmaid for its “Murder House” and “Asylum” installments the last two years — and in the hunt with its “Coven”-themed season this time around.

Another veteran of the “Miniseries or Movie” wars, BBC America’s Luther, will also attempt to earn its first statuette in 2014.

Rounding out the field are FX’s buzzy Fargo, the final run of HBO’s Treme, A&E’s Bonnie & Clyde and Starz’s The White Queen.

RELATED Emmy Poll 2014: Who Should Win Best Supporting Actress in a Comedy?

Tomorrow through Friday, we’ll launch another daily “Who Should Win” Emmy poll, so come back to TVLine.com to weigh in on who’s most worthy of TV’s biggest honor!