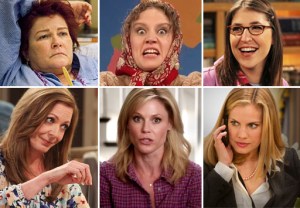 It’s easy to complain that the Emmys give us the same old set of nominees year in and year out, but that would be ignoring what’s happening in the 2014 race for Best Supporting Actress in a Comedy Series.

Not only is the 2013 champ (Nurse Jackie‘s Merritt Wever) relegated to the sidelines, but a full 50 percent of this year’s contenders are first-timers in the category: Mom‘s Allison Janney; Orange Is the New Black‘s Kate Mulgrew and Saturday Night Live’s Kate McKinnon.

Two other actresses with 2014 nods are also seeking their initial wins: The Big Bang Theory‘s Mayim Bialik (nominated for the third consecutive year) and Veep‘s Anna Chlumsky (currently on nomination No. 2).

That leaves Modern Family‘s Julie Bowen — the victor in 2011 and 2012 — as the only 2014 contender who’s already tasted victory in the Supporting Actress in a Comedy sweepstakes. (Janney, of course, was a four-time winner on the drama side — twice as supporting, twice as lead — during her run on The West Wing, while the other four actresses in the race remain trophy-free.)