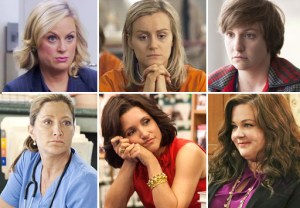 The last three women to take home the Emmy for Outstanding Lead Actress in a Comedy Series will duke it out again in 2014, alongside a pair of perpetual bridesmaids and an intriguing newcomer to the race.

The three actresses seeking a return to the podium are Veep‘s Julia Louis-Dreyfus (a winner in 2013 and 2012, as well as in 2006 for The New Adventures of Old Christine); Mike & Molly‘s Melissa McCarthy (the 2011 champ) and Nurse Jackie‘s Edie Falco (victorious in 2010).

Parks and Recreation‘s Amy Poehler, meanwhile, is hoping to end her Emmy drought on her fifth nomination, while Girls‘ Lena Dunham enters the scrum for the third consecutive year. On the ballot for the first time? Orange Is the New Black‘s Taylor Schilling.

RELATED Emmy Poll 2014: Who Should Win Best Supporting Actor in a Drama?