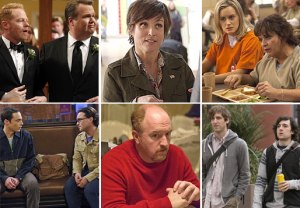 RELATED Emmy Poll 2014: Who Should Win Best Supporting Actor in a Drama?

RELATED Emmys Poll 2014: Who Should Win Best Supporting Actress in a Drama?

Meanwhile, Veep and The Big Bang Theory, respective winners in 2013 for Lead Actress and Lead Actor in a Comedy (for Julia Louis-Dreyfus and Jim Parsons), will try to land the big prize this time around. (Veep is nominated for the third consecutive year, while TBBT is in the race for the fourth straight time.)

Rounding out the field? FX’s Louie, which has to hope that in terms of its Emmy chances, the second time being nominated will be the charm.

What would you do if you had the power to honor one of these fine shows when the Emmys are handed out on Aug. 25? Take our poll below to vote for your favorite, then hit the comments to justify your pick!