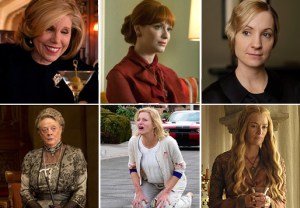 Not-so-good news for Breaking Bad‘s Anna Gunn and Downton Abbey‘s Maggie Smith. Not since Huff‘s Blythe Danner strode up to the podium in 2006 has there been a repeat winner in the Emmy race for Outstanding Supporting Actress in a Drama Series.

If Emmy voters continue the trend of spreading the wealth in the category, Gunn and Smith — who respectively snagged Supporting Actress statuettes in 2013 and 2012 — will have to settle for the honor of simply being nominated.

RELATED  Emmys 2014: Who Should Win Lead Actor in a Drama? Take Our Poll!

The Good Wife‘s Christine Baranski, meanwhile, also has herself an Emmy — but as Supporting Actress in a Comedy (back in 1995, for Cybill). This year marks her fifth straight nomination for playing steely, stylish Diane Lockhart, a distinction that ties her for the title of “Most Overdue” alongside Christina Hendricks, who’s also hoping the fifth time will be the charm for her portrayal of Mad Men‘s Joan Harris.

Rounding out the field are Downton Abbey‘s Joanne Froggatt (also nominated in 2012) and Game of Thrones‘ Lena Headey, the only first-timer in the field.

What would you do if you had the power to honor one of these fine actresses when the Emmys are handed out on Aug. 25? Take our poll below to vote for your favorite, then hit the comments to justify your pick!