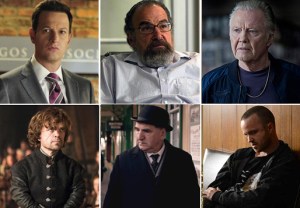 The Emmy race for Outstanding Supporting Actor in a Drama Series has swung back and forth like a pendulum this decade — and if the trend continues, it’ll be Breaking Bad‘s Aaron Paul (a winner in 2010 and 2012, but not 2011 and 2013) who’ll stroll up to the poduium in this even-numbered year.

RELATED Emmys Poll 2014: Who Should Win Best Supporting Actress in a Drama?

Yet while Paul won’t have last year’s champ — the now inelligible Bobby Cannavale of Boardwalk Empire — to thwart his chances, there will be other Emmy darlings in his path, including Game of Thrones‘ Peter Dinklage, a winner in 2011, as well as Jim Carter (nominated in 2014 for the third time for Downton Abbey) and second-time nominees Josh Charles (The Good Wife) and Mandy Patinkin (Homeland).

Even Jon Voight, new to the category for his work in Ray Donovan, has two prior nods in the Outstanding Supporting Actor in a Miniseries or a Movie division (for 2002’s Uprising and 2006’s Pope John Paul II).

Yep, all of these fellas have paid their dues.

What would you do if you had the power to honor one of these fine actors when the Emmys are handed out on Aug. 25? Take our poll below to vote for your favorite, then hit the comments to justify your pick!

Every weekday for the next couple of weeks, we’ll launch another “Who Should Win” Emmy poll, so come back to TVLine.com every day to weigh in on who’s most worthy of TV’s biggest honor!