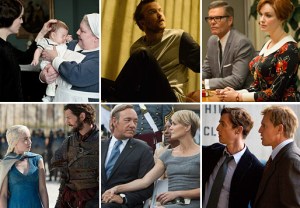 That’s the story in the 2014 Emmy race for Outstanding Drama Series, where True Detective — the dark mystery series that some Emmy watchers expected HBO to submit in the miniseries category — promises to make the outcome unpredictable.

Of course, the Matthew McConaughey-Woody Harrelson vehicle’s no shoo-in. Last year’s champ, Breaking Bad, is back — in its final year of eligibility — as is Mad Men (a four-time winner from 2008-2011).

And for those who prefer to see a perpetual bridesmaid walk down the aisle (to the podium), you’ll have your choice of Game of Thrones (nominated for the fourth straight year), Downton Abbey (making its third attempt in the category) and House of Cards (only on nomination No. 2).

What would you do if you had the power to honor one of these fine shows when the Emmys are handed out on Aug. 25 ? Take our poll below to vote for your favorite, then hit the comments to justify your pick!