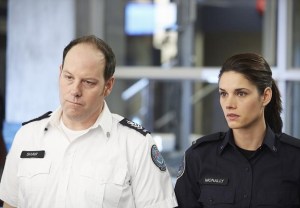 It’s just not Oliver’s day on Thursday’s Rookie Blue as Duncan continues to cause problems for the officers of 15 Division. Meanwhile, Chris is caught mid-high, and Gail reaches out to her ex.

DUNCAN FAIL RATING | I’m going to say nine, because at least he didn’t put any lives in physical jeopardy this time. Professional Standards pushes up the disciplinary meeting, forcing Oliver and Andy to scramble to put together her defense and explain why her reports on Duncan are kinder than reality. The questioning seems to be going OK, but then Duncan reveals that he recorded his conversation with Andy at the Penny, in which she basically admitted fault. (Oh, Andy.) To save Andy’s behind, Oliver makes a deal with Police Commissioner Jarvis. Oliver will remain Staff Sergeant, much to his displeasure, and Jarvis shuts down the investigation. Meanwhile, Andy is upset when Oliver admits she wasn’t ready to be a training officer, but can you blame him?

To put the cherry on Oliver’s crummy day, his daughter Izzy shows up at 15 Division because she got into trouble at school. Then she disappears while Gail is “babysitting” her. In the end, Oliver discovers that Izzy’s upset because she saw his girlfriend Celery performing a fertility exercise, which is news to Oliver. The two then take off for some much-needed daddy/daughter bonding.

MENDING BRIDGES | Gail tries to make good with Holly, inviting her out for a drink. Unfortunately, it’s too late — Holly has moved on and is seeing someone new! Ouch. But maybe all hope is not lost for the former couple? When Holly returns some evidence to the precinct, Gail tries again to the mend their relationship, apologizing and telling her she wants to change. Sure, they don’t necessarily make up and get back together, but I can’t help feeling like Gail cracked the door back open a bit with her sincerity.

ON A HIGH | Chris’ secret is out when Dov discovers a bag of coke in his friend’s car. Instead of being sick, like he called in, Chris is at home drinking, playing online poker and getting high. And he’s really bad at covering up his drugs when Dov arrives. Naturally, Dov is furious — this is his house Chris has coke in, after all — while Chris miserably fails at playing the “I’m not a junkie!” card. Dov reminds him that he’s a cop. It’s all very messy, and I’m not just talking about the room.

BIRTHDAY SURPRISE | Am I crazy or am I sensing some vibes between Chloe and Nick? While the two are on a case together on her birthday, she shares her B-day tradition: Eating popcorn and watching The Breakfast Club. So when a package with those two things was left for her at the front desk, I immediately thought it was from Nick and that he was coming through for the win while Dov was MIA dealing with Chris. But it was actually from Chloe’s husband Wes, so I guess he’s not out of the picture yet.

Rookie Blue fans, how great was it to see Matt Gordon (aka Oliver) in the spotlight? Should Holly take back Gail? And please tell me I’m not nuts re: Nick/Chloe.