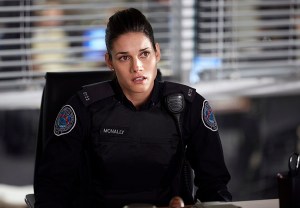 Warning: If you have yet to watch Thursday’s Season 5 premiere of Rookie Blue, avert your eyes now. Everyone else, read on…

The cops of Rookie Blue returned to ABC on Thursday night, and so did the heartache.

Andy, essentially, broke things off with Nick to be with her ex Sam. But just when it looked like the pair was finally ready to give it a real go, Andy told Sam she needed space after his sister scared her off with a spiel about Sam shutting down.

So where does “McSwarek” go from here? How is Nick moving on? And why in the world isn’t Chloe divorced yet? TVLine chatted with executive producer Tassie Cameron to get the answer to those burning questions and more.

TVLINE | You left things on a little bit of an ambiguous note with Sam and Andy. What is the state of their relationship after the premiere?
Sam and Andy are trying to find their way back together, but there’s been a lot of water under the bridge. There are lots of things to work out, and they want to take it slowly and do it right. So we’re trying to depict a realistic, slow burn to make sure that they can make it work this time.

TVLINE | Sam said, “I don’t want to waste any more time.” So is this hesitation and slow burn more on Andy’s side than it is on Sam’s?
Andy was in a pretty meaningful new relationship with Nick. And anything that we know about that character [is that] she’s cautious. She’s a perfectionist. She’s a pleaser. She doesn’t want to hurt people’s feelings. She wants to get it right this time. She’s trying to measure the pros and cons and make sure that this is the right choice.

TVLINE | What’s Andy’s takeaway from what Sam’s sister said to her about him shutting down when — pardon my words — sh-t hits the fan?
Sam’s sister has probably identified Andy’s biggest fear about Sam. When somebody that close to someone, someone’s sibling, says something like that about him, she has to be careful because that’s her biggest fear about him, as well, especially after what happened in Season 3. But Andy’s come a long way. She’s grown up a lot in the past five seasons, and she’s going to make her own decision. TVLINE | Meanwhile, you have poor Nick, brokenhearted. Where does this leave him? By my count, there’s no single females left in the ensemble to pair him up with.
[Laughs] I know, I know. Poor, old Nick. [He] carries a bit of a procedural ball most of the season, but wait for the second half of the season and you’ll see what we have in mind. Actually, you’ll get a sense of that in the last couple of episodes of these 11. … It wouldn’t have been realistic to have him leap into anything new right away. We think the world of him as a character and as an actor, so we were not ready to get rid of him.

TVLINE | I was hoping you could clear something up for me. I’m a little bit unclear as to why Chloe didn’t get divorced from Wes.
[Laughs] Even after seeing the second episode?

TVLINE | Is it just fear of how Wes might retaliate? Because he is so possessive and jealous?
She wanted it over with. She wanted a fresh start, and I think you have to wait a year to get divorced. You have to be separated for a year anyway, at least you do in Canada. So it was more a question of, “I’m moving on. I’m going to get a fresh start, and I’m sure I’ll get around to that divorce at some point, but it’s not that meaningful to me.” But then once you let it be a secret, it starts to take on a bit more importance as a secret. We thought it was actually fairly true to the character of Chloe that she might have just not gotten around to it and it became this secret that blew up in her face.

TVLINE | Is Traci actually going to welcome Steve’s help in her custody battle? He’s getting involved all on his own behind her back. Is that a good thing or a bad thing?
It’s a little bit of both. It comes from the right place in Steve. He’s very protective of her and wants to be helpful. But we were interested in exploring the moral grey area. If you’re a police officer and you can find out stuff about people that will help the right thing happen on a personal issue, do you? We were trying to explore that grey area and whether he should or shouldn’t be using that information. So she welcomes it until she doesn’t. TVLINE | With Gail, was the haircut written into the script? Did the actress [Charlotte Sullivan] come to you and say, “I cut my hair. Can we write it in?”
The actress came to us in the summer and said, “My hair has been overprocessed and blond for so long that it’s in disastrous shape. I need to cut it.” And so we said, “Of course,” and then we didn’t know how we were going to deal with it. Usually, it would be easy to manage something like that because we come in a couple of months after a season finale. But in the case of this, it was a couple hours later. So we thought, why don’t we see if there’s something interesting and fun we can do with this on screen. So we wrote it in after she’d cut her hair.

TVLINE | That scene where Holly helps Gail cut her hair really reinforced their relationship. But this is a very different kind of romance for Gail, so what kind of challenges are they going to experience?
I think that you’ll see that they’re very in character for her. It’s not about whether she’s with a man or a woman. It’s about whether Gail Peck can ever really handle being intimate and close with somebody without letting her defenses go up and get the better of her. And that’s pretty authentic to who she is, and she’ll grapple with that with Holly, as well.

TVLINE | Andy and her rookie Duncan have gotten off on the wrong foot, right away. Is that going to continue?
Yes. [Laughs] Duncan is a real professional antagonist for Andy McNally this first half of the season. … He’s a well connected young man. His stepfather is the commissioner, which is pretty high up in the police force. So it’s going to really prove challenging for Andy.

TVLINE | With the commissioner there, it seems like you’re putting more professional scrutiny on the division than in past seasons. Are things a little bit tighter and more worrisome for the cops this year?
Yeah, we’re finally allowing ourselves to take a look at some of the politics within the force — old guard versus new guard. Obviously, our main characters are the new guard of policing. We’re interested in the friction between the very, very old school institution and the young, fresh faces with idealism and a new way of doing things and how those two types of policing can come in conflict with each other.

Rookie Blue fans, what did you think of the season opener? Did Sam’s sister scare you with her warning? Do you feel bad for Nick? And stay tuned to TVLine for even more Season 5 scoop!