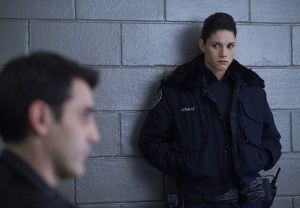 Warning: If you have yet to watch Thursday’s Rookie Blue, avert your eyes. Everyone else, read on…

Thursday’s Rookie Blue saw Andy and Sam clear a huge obstacle, as the detective finally shared his troubled history with his father and set the couple on a path toward newfound closeness.

“She needed to see him actually let her in, in a real way,” star Missy Peregrym tells TVLine. “And because he did that, she was willing to try, willing to put herself in the position to be vulnerable with him.”

Now that Andy’s seen her boyfriend’s softer side, is the pair all in for the long haul — with no hope for Ghosts of Exes Past?

For both characters, the focus “isn’t about anybody else,” Peregrym argues. “It really isn’t. It’s about how they can work together to be the best that they can be.” And yet, in figuring that out, they’ll have to tackle some “pretty huge” challenges before the season’s over.

TVLINE | Sam really opened up to Andy in a big way about his past in this episode. How does this change their relationship going forward?
It had to come to this point where we needed to make a change. Otherwise, there was no point in getting back together. As nice as it is — “Sam and Andy are together, and it’s awesome!” — unless we’re wiling to be vulnerable with each other and open up, we can’t actually move forward. So I was really excited to do this scene. I was happy that we were going there.

TVLINE | Are there still things Andy is curious about with Sam’s past? Or does this episode answer most of her questions?
No, there’s always something to learn. I don’t want to say too much, just because of things that come up later in the season that are pretty huge, that they need to work through.

TVLINE | What do you see as being the biggest issues still left for them to tackle?
[Laughs] Can’t tell you that. Like I said, there are some things that come up that are pretty big. Sam really likes to have it all together and he doesn’t like being exposed. Andy has a gift of being empathetic and vulnerable and all these things, but Sam protects himself from that. It’s very hard for him to feel safe in those scenarios. He’s going to be pushed more and more, and Andy is also going to have to accept some circumstances and realities a little bit. The theme of this season is, “Life is not a fairy tale.” And it’s not. I mean, I kinda disagree. It’s not the fairy tale we think it should be. This is more realistic, and the whole season is a lot of people who are going through some very grounding circumstances and situations that are pretty humbling. And it’s so hard. TVLINE | Sam has addressed the fact that he’s not the most open person about his past. What does Andy need to address in the relationship?
Hmm… That’s a great question. Andy has a real issue with being liked and being enough. This is where she has to put things down and stop being the good guy all the time. Understanding her limitations, and if it’s not enough for another person, it’s OK. She knows that [Sam’s] not very open. She can express all she wants to, but that makes them right for each other and there’s an acceptance of that, for her, I think. … She genuinely wants a partnership. It’s not about her doing everything or covering up or making up for everything anymore. She’s done that with Duncan, already. She thinks she’s doing the right thing, she’s trying to be understanding and empathetic, and it’s gotten her into a lot of trouble. That’s something that she’s going to have to work on.

TVLINE | I love how, in this sort of oblique way, they’ve started talking about their future together, where they would retire, go on vacation. Are there more serious conversations like that about “Maybe we should move in together”?
There’s definitely the intention to be together. That’s why this conversation is so important in the episode tonight because we’re either in or we’re out. We’ve gone back and forth so many times that we either do the hard work and we make it happen and we’re partners with each other in a very real way that is challenging, personally, to be good together, or we’re out. TVLINE | Is there any part of you that misses the dynamic between Andy and Nick?
Umm… It’s definitely a lot easier with Nick. He was extremely transparent, pretty open. They’re both pretty similar in that regard. [Now], she just misses her friend. There’s not really a friendship there anymore and that’s obviously a loss. They’re also great when they work together and that’s gone. But other than that, it’s all about Sam. It always has been.

TVLINE | What kind of challenges does Duncan and that investigation present for Andy going forward?
It sucks because she cared about him. She really wanted him to succeed and do well. [She] liked him as a person, but it was a pretty big betrayal, the thing that he did pull off. I understand that it’s complicated. But it’s very difficult to get close to that again. And, naturally, there’s still some work situations that come up at the end of the day. She’s going to do her job and she’s going to look out for him. And they have to work together. But she doesn’t train him anymore. She’s done with him.