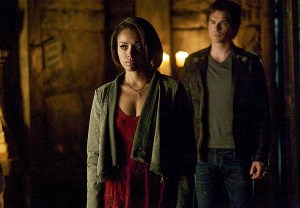 The early part of The Vampire Diaries‘ sixth season will be Rated G… for Grief.

Having lost her boyfriend – and her close friend Bonnie – Elena (as well as her pals) will still be feeling the sting of loss when the CW drama undergoes a four-month time jump following its devastating Season 5 finale.

“It’s been enough time for everyone to make some big choices in their life,” previewed executive producer Julie Plec, at the show’s Comic-Con panel on Saturday. In the aftermath of the Season 5 ender, everyone is dealing with the loss in different ways. “Some are doing it very well, and some are not doing it very well at all.”

Added star Nina Dobrev: “[Elena is] definitely not in a happy place. She has a strange, confusing way of dealing with her grief,” which does not include comfort sex with a new guy, for the record.

“If she did that, that’d mean that her experience and her love for Damon wasn’t real,” Dobrev said.

HOT FOR TEACHER | Recently returned vampire Alaric will be “be living outside of Mystic Falls, having compelled his way into a teaching job at the local university,” Matt Davis revealed. And he must be getting some! “If anyone deserves a little naughtiness, it’s Prof. Saltzman,” Plec added.

STEFAN’S NEW LOVE | When the topic of “Steroline” came up, Paul Wesley was quick to note, “Stefan’s been pretty good. He deserves some action.” But will Elena pull the sisterhood card on a possible romance between her ex and her BFF? “That’d be so hypocritical,” Dobrev said. “She dated both of the brothers. She keep it in the family.”

LITTLE GILBERT | Helping Jeremy through the loss of Bonnie won’t be easy for Elena and Alaric. “Having to deal with him when neither of them can actually enter Mystic Falls is complicated,” Plec shared.

Excited about these Season 6 teases? What else would you like to see from The CW’s bloody-good hit? Sound off below!
https://www.youtube.com/watch?v=Rls3r5VW0FQ