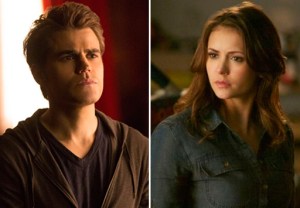 With just under 11 weeks to go until the return of The Vampire Diaries, TVLine caught up with executive producer Julie Plec to see how Elena and the Salvatores are coping with that massive season finale twist.

According to Plec, Season 6 — beginning with the Oct. 2 premiere, which we’re told is titled “I’ll Remember” — will be a trying time for all of our favorite characters, particularly those left behind to mourn the apparent losses of Damon and Bonnie. (Spoiler alert: Don’t expect any otherworldly reunions in Episode 1.)

TVLINE | I have to ask: Is there a chance Damon and Bonnie will like where they are? Is it almost heaven-like?
Ooh, well… I can tell you this: Where they are is part of the mystery of the beginning of the season. It’s not torturous, but it’s by no means a roller coaster ride of fun. If nothing else, it’s a bit of an existential experience. [Laughs] TVLINE | How aware of their new surroundings will they be?
They’ll be aware that they’re no longer where they thought they were — but they’re also not dead, per se. They’ll be asking a lot of questions, along with the audience, including: What’s going on? Where the hell are we? And how do we get home?

TVLINE | There’s a crazy internet rumor out there that suggests Elena will want to reunite with Damon so badly, she’ll consider dying to join him. Is there any truth to that?
I’ll just say that I think it’d be super sad for a young woman in her vibrant, early years to take her life and die on the sword for the love of a man. As much as I am a romantic and believe in true love, I also believe in therapy and trying to pull yourself together and getting on with your life.

TVLINE | Is she pulling herself together? What can you say about Elena’s mental state in Season 6?
She’s trying, and I won’t necessarily say she’s succeeding. She’s got some complicated coping mechanisms that are making her be things and do things and act in ways that we wouldn’t normally expect from her. TVLINE | And how is Stefan coping with the apparent loss of his brother?
Stefan has made some very big choices about how he wants to live his life in the wake of his brother’s death. That’s part of the first round of reveals of where our characters are. Is he off on the top of a mountain talking to a shaman? Is he trying to get answers from a witch about how to fix everything? Is he back to being a ripper? Is he drowning his sorrows at the bottom of a bottle? We’ll see…

Vampire Diaries fans, we’ll have more Season 6 scoop in the coming days, but for now, give us your thoughts on Plec’s latest teases. How do you hope Elena and Stefan will fare this fall? Drop a comment with your thoughts below.