“This list is getting uncomfortably long,” Enzo muttered during Thursday’s Vampire Diaries season finale — and he was right. By the end of the hour, more of Mystic Falls’ finest had experienced the Other Side than ever before. Unfortunately, not all of them made it back.

I’m mostly referring to Damon and Bonnie, who ended the finale holding hands and facing certain doom. “Do you think it’ll hurt?” Bonnie asked as the bright lights of oblivion began to consume them. Unfortunately, we’ll have to wait until Season 6 to get that answer, as the episode ended before we could get any kind of resolution whatsoever.

Now, let’s go back and see how we arrived at this seemingly tragic end, shall we?

THE PLAN | With Mystic Falls officially under Traveler occupation, the only way to re-open the gate to the Other Side was to kill as many of Markos’ cronies as possible. That said, completely blowing up the town wouldn’t have been my first plan — what is this, Arrow? — and I certainly wouldn’t have picked Damon (with Elena in tow) to sacrifice himself.

THE RETURNS | Nina Dobrev wasn’t kidding when she told TVLine that we’d see lots of familiar faces during the finale. First came Lexi, who saved Stefan from being sucked into Oblivion — he totally owes her a beer — then Silas, who’s just as smarmy, yet surprisingly more helpful, than I remember. And then there’s everyone’s favorite cupcake of a history teacher, Alaric, who managed to sneak in a joke about Elena dying with her seatbelt on (too soon!) before eventually coming back to life. That’s right, kids, Alaric is back for real. And it’s a good thing, too, because Elena is going to need a father-esque shoulder to cry on, what with her boyfriend being potentially gone forever.

THE GOODBYES | Where do I even begin? This week’s finale had the highest death count — including second, and in some cases third, deaths — of all time. The death parade began with Tyler, who returned to his human form before succumbing to the neck-break that originally killed him, followed by Luke, who got exactly what he deserved for tangling with Caroline. Bringing up the rear were Damon and Elena, who served as sexy human detonators for the big boom. Grams and Lexi were sadly sucked into Oblivion, as were Silas and Markos, though I don’t expect anyone to lay lilies on either of their graves anytime soon. Of all the aforementioned people, Elena and Tyler (who is no longer a hybrid!) were the only ones to come back to life, along with Stefan, Enzo and Alaric, all of whom had been killed in previous episodes.

(Side Note: There seems to be some confusion over Lexi and Grams, who “found peace,” versus Silas and Markos, who were clearly dragged away. Did they end up in different places? Share your interpretation in the comments below.)

THE STEROLINE | Damon and Elena’s devastating goodbye obviously stole the audience’s focus in the final minutes — phenomenal performance from Nina Dobrev, by the way — but the episode also showed plenty of love to a certain budding couple in Mystic Falls: Stefan and Caroline. Long before the two shared a sweet, yet heartbreaking, moment at the end of the hour, Lexi grilled her BFF about his feelings for Ms. Forbes. “Wow, you really don’t see it, do you?” she asked him, before assuring him he’d live long enough to see his first date with her.

Browse photos from The Vampire Diaries‘ season finale below, then rate it and drop a comment with your burning questions (i.e. Where did Bonnie and Damon go?!) We’re chatting with TVD boss Julie Plec tomorrow, so let’s have ’em. 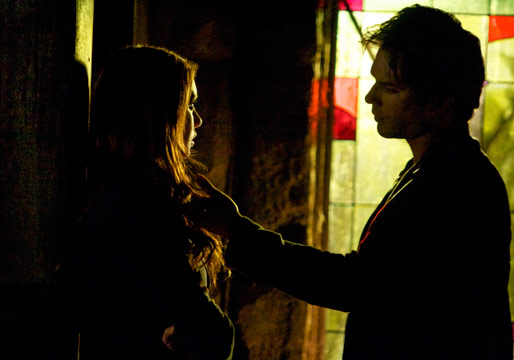