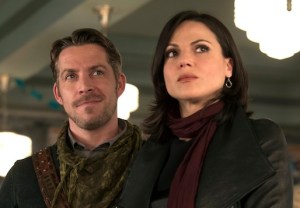 Is Once Upon a Time‘s Evil Queen back with a vengeance?

A sneak peek at the ABC drama’s Season 4 premiere, screened at the San Diego Comic-Con on Saturday, suggested as much, as Regina sought out a familiar frenemy.

“I need my mirror,” she declares, visiting Giancarlo Esposito’s entrapped adviser. “There’s someone standing in the way of my happiness. I need your help getting rid of them.”

Is Regina’s heartbreak, brought on by the return of Robin Hood’s “dead” wife Marian, going to lead her back down a dark road? “I think she has something up her sleeve. But is anyone surprised about that one?” star Lana Parrilla previewed with a laugh. “She’s a bit conflicted. She’s enjoyed being good [and] light magic. However, old habits die hard.”

In turn, Regina’s relationship with Henry’s other mother will go through its own ups and down, as the two come to terms with the fact that Emma is responsible for this unexpected “resurrection.”

“It’s an impossible situation,” Jennifer Morrison described. “I can’t apologize for saving a life. Yet I’m horrified that I’ve gotten in the way of Regina’s happiness…. It adds a nice element of conflict and concern and generosity.”

ONCE UPON A FROZEN TIME | Another first look at the season opener featured Anna and Elsa (played by Elizabeth Lail and Fringe‘s Georgina Haig) visiting their parents’ grave. Elsa then tells Anna that she has a surprise for her before her wedding.

MAKEOVER SEQUENCE | As TVLine reported, Hook will be getting some modern ‘duds. “It’ll be nice to wear something new,” Colin O’Donoghue enthused, noting that Hook’s leather coat weighs 50 pounds.

FATHER AND GRANDSON | “We’re definitely exploring that relationship [between Henry and Mr. Gold] more,” series cocreator Adam Horowitz teased, adding that they just shot a “beautiful scene” between the two.

RUMBELLE UPDATE | Despite his dagger-related betrayal, cocreator Eddy Kitsis noted that Rumple and Belle’s wedding was truly heartfelt. “When we wrote it, he absolutely loved her,” he said. “Those vows were genuine. But that doesn’t mean he doesn’t have his weaknesses.” Added Robert Carlyle: “I think the story’s got a long way to play. I think this dagger may come back again, and get lost again, and come back again….”

MATTERS OF THE HEART | Who is Emma’s true love? The EPs and cast aren’t spilling. “She’s on a journey,” Horowitz replied. “It’s not really about her relationships; it’s about finding herself.” But perhaps there’s a hint to be found in this statement from Kitsis about the difference between true love and soul mates: “True love is when you truly love someone. Soul mate is the idea that there’s only one person for you. On our show, we’ve learned that happy endings aren’t what you would expect. If you love somebody, if it doesn’t work out, you should love again.”

RELATED Once Upon a Time Mystery: Who Is Elizabeth Mitchell Playing…?

ONCE UPON A… MUSICAL? | It’s not looking likely that Once will get its song and dance on. “The problem with doing a musical [episode] is we don’t know how,” Kitsis shared. So if you were holding onto the idea that the Frozen infusion would get musical… well, let it go.