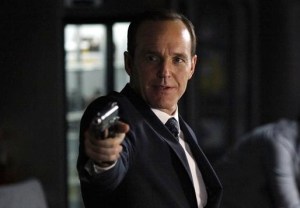 ABC Entertainment president Paul Lee held court at the Television Critics Assoc. summer press tour on Monday morning, where he fielded questions about Agents of S.H.I.E.L.D.‘s sophomore mission, Once Upon a Time‘s imminent riff on Frozen, the network’s treatment of Trophy Wife and the impressive diversity on tap for the 2014-15 TV season.

Addressing the topic of S.H.I.E.L.D.’s freshman run — which tread a lot of water until the big Captain America 2 crossover took shape — Lee acknowledged, “It took time to find our sea legs, but once we did… it brought a whole load of creativity to our back 9.” Lee said that Season 1’s final stretch of episodes — which dismantled the S.H.I.E.L.D. organization and then named Agent Coulson as Director of its reboot — “triggered a whole lot of [Season 2] storylines that we’re reading at the moment, and I’m loving those scripts. I feel good.”

Other topics tackled by Lee during his TCA appearance:

* Lee touted Once Upon a Time‘s integration of Frozen characters as a “wonderful asset,” and noted that Disney chief creative officer John Lasseter has been on set in Vancouver and is “integrally related” to what the ABC series has in store for Elsa, Anna et al. All told, Lee hailed Once as “a greatly underrated show,” possibly due to its reputation as “a big family show.”

* Lee expects The Goldbergs — now airing on Wednesdays — to be “discovered by a lot more people” in Season 2. As for Trophy Wife, a new comedy from last season that failed to earn renewal, Lee said the ratings “always disappointed,” even when they sampled reruns on Wednesdays. “We tried hard toward the end of the season to create promotable episodes,” he said, “but we really couldn’t bring people to it.”

* Though admittedly “disappointed” with summer singing show Rising Star‘s early ratings, Lee posited that “the episodes now are really high-quality. So let’s see where it goes.”

* When reporters commended the greater racial diversity represented by ABC’s current line-up, Lee said it’s not only the network’s “mission statement to reflect America” but “our job. When [creatives] bring you authentic, relatable stories, you have no other option but to pick them up.” Lee went on to say that “if you look at shows now that lack diversity, they feel dated, because America doesn’t look like that anymore.” On related-ish notes, Lee defended the new sitcom titles black-ish and Fresh Off the Boat (about an Asian family) as being the product of the “powerful voices” behind the respective programs. “You always want a title that will catch the eye and catch the imagination,” he added, “and those both do.”