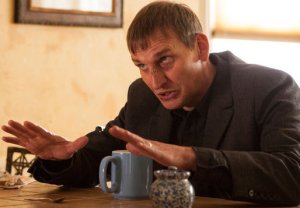 THE EPISODE | “Two Boats and a Helicopter”

Ever since the Great Departure, the reverend has published pamphlets revealing the misdeeds of the “heroes” taken in what he’s certain wasn’t the Rapture. As a result, not only has his flock dwindled, he’s been subjected to regular beatings by the loved ones of those he exposes.

So is Matt a nice guy or nasty? A man of faith or an absolute madman? Eccleston’s performance suggests that the answer is all of the above.

On one hand, the erstwhile Dr. Who plays the preacher as someone who sees himself as being 100 percent right — and righteous. (After signs from God lead him to the jackpot he needs to save his church, he murders the mugger who tries to steal his winnings.) On the other, he’s a total a–hole. (Unhappy with his sister’s opinion, he blabs that her husband was unfaithful.)

In the end, whether you liked Matt or wanted to slug him, you couldn’t come away from the hour without being knocked out by Eccleston. He took a character who sees in black-and-white and beautifully painted him in shades of gray.

HONORABLE MENTION | The applause for Allison Janney’s work on Masters of Sex — well-deserved, we might add — has been so deafening that, often, it’s felt as if not enough attention was being paid to her leading man, Beau Bridges. But in “Parallax,” there could be no denying the harrowing brilliance of his portrayal of reluctantly gay Barton. First, the veteran actor made us ache as his alter ego awoke, sick and disoriented, following “curative” electroshock therapy. Then, he nearly shattered us when Barton determinedly initiated one of the saddest love scenes ever. “I wanna be with you,” he said, trying to convince himself as much as Margaret. Though Barton’s efforts were for naught, Bridges’ were not. By the hour’s end, he had wrecked us. Bravo.

HONORABLE MENTION | It took a while for Switched At Birth‘s Angelo Sorrento to get the hang of fatherhood, but, once he did, Gilles Marini showed us a man trying to be the best father he could be — and this week’s flash-forward only reminded us of that, making his death all the more painful to watch. As Angelo coached Bay through her labor pains, Marini reminded us of his comedic prowess, making her (and us) laugh. Later, as he calmed Daphne’s pre-wedding jitters, Marini’s happy tears and fatherly pride spoke volumes of the relationship that could have been… bringing us to tears as well.